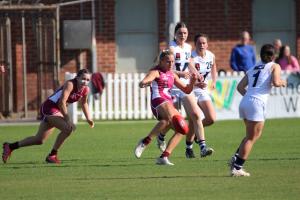 Teagan Levi is a strong inside midfielder with great game sense, athleticism and skills making her just about the complete player.

Teagan Levi is the top ranked Queensland prospect, coming out of the Gold Coast Suns Academy who have the first selection in this year’s AFL Women’s Draft. A strong inside midfielder, Levi is looking to join sister Maddison at the elite level, and has similarly impressive athletic traits to her taller, key position sister.

Levi in her own right is a fairly complete package as an inside midfielder, with great ball-winning skills, disposal and game sense to go with her athleticism. There are not too many flaws in Levi’s overall game, and when she has time and space, she will carve up opposition defences with pinpoint kicks that have required terrific vision to identify teammates in space.

One difference with Levi compared to some other midfielders is the fact that she has excelled there so well that she has not needed to roll through many other positions. Versatility is a way she can add extra strings to her bow, though no doubt with her traits she could be damaging anywhere on the field. As one who can use the ball by hand or foot, Levi is a valuable inside midfielder in extracting the pill from the stoppage and getting it to teammates on the outside, or bursting away from the congestion.

In Queensland’s loss to Vic Country, Levi had 17 disposals, six clearances and five tackles in a big performance for her state. After shining as a bottom-ager in the Queensland All-Stars clash last year, Levi has not done too much wrong to remain as one of the brightest young talents coming through the program.

Gold Coast might not have had the best season in 2021, but Levi is an exciting player that fans will enjoy watching going forward.

“Giving Gold Coast fans something to smile about after a tough AFLW season, Levi was convincingly one of the top few most impressive girls on ground, and showed she is close to a complete package in terms of a draft prospect. Lining up in the midfield all game, Levi was a presence around stoppages with her speed, agility and ability to find the ball all combining to see her win plenty of it, where she’d follow up with her pinpoint handballs or penetrative kicks forward to find options up to 50 meters away. She got to the right spots around the ground, able to be at multiple contests in a row to win the ball and hand it off to a teammate. A real showcase of her speed came in the third quarter, where she ran from centre wing to the defensive 50 arc to tackle Country’s Paige Scottfor a holding the ball free kick.” – Declan Reeve via “Top Performers – AFLW U19 Championships: Vic Country vs. Queensland”

“If Pauga’s hands are among the cleanest going around, then Levi’s vision and kicking are right up there with anyone in the draft crop. Twice she stopped, propped and looked inboard with a slicing pinpoint pass to open up the game and hit a target, including setting up a goal to Lily Tarlinton. She has the inside ball-winning ability to match her decision making and cleanliness, able to win clearances and get it forward, bullocking her way through traffic. She did bite off too much at one stage in the fourth term, with multiple Coorparoo players dragging her to ground for a holding the ball call.” – Peter Williams via “Top Performers: Queensland Under 19s vs. Coorparoo”

“The sister of recently drafted Gold Coast Suns’ talent Maddison, Levi is 11cm shorter and plays onball rather than forward. Her athletic traits are similar to that of Georgia Patrikios in the way that she can seamlessly get herself out of trouble by wrong-footing and side-stepping opponents with ease. Not only is she able to beat them in congestion, she can run and take the game on down a wing, and then when the opponent wins it, she is the first to lay a strong tackle. Similar to Prespakis, Levi has so many weapons and is as effective defensively as she is offensively, and is the standout Queensland prospect for next year and in the clear top few talents running around.” – Peter Williams via “2021 AFLW Under 18s Ones to Watch”