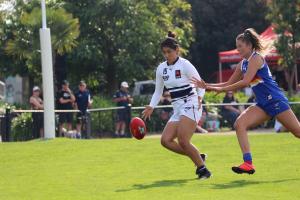 One of the Northern Knights’ most valuable players in 2021, Tarrah Delgado is a rock-solid defender with plenty of power. The 173cm prospect played 13 games across three seasons with the Knights, finding her place down back and even showing the potential to impact as a bigger body in midfield. Her form was enough to earn selection as a key post in Vic Metro’s Under 19 side, and Delgado also made the step-up to VFLW level for three outings with Carlton.

As far as key defenders go, Delgado possesses some massively important traits for her position. She has a strong build which bodes well for contested work both in the air and on the ground, making her a difficult player to get through when looking towards goal. The 17-year-old is an astute reader of the game, able to position well when playing the intercept role to impact with big spoils and relieving marks.

Delgado also contributes with ball in hand, gaining serious meterage with her booming kick. She took on the kick-in duties for Northern this year and set the Knights up well, either snatching territory or looking for safer short options. While it is listed as an improvement, Delgado did show nice development with her rebounding run as she looked to spark her side’s transitions from defence, but could always add more of that to her game.

Another string to her bow in future could be that of versatility, with a couple of handy midfield stints proving Delgado can apply her best traits to different roles. She just about won Northern a game off her own boot in Round 6, moving into midfield to spark a remarkable comeback with her ball winning ability on the inside and that trusty long kick. Those feats also showcased great leadership, which can be observed in Delgado’s demeanour and willingness to do the team things.

“(Delgado) played a couple of games with us in 2019 and then played all three in 2020 and really found her spot in defence. She’s a really solid intercept marking defender with an incredible read on the game and a pretty impressive kick on her, so she’s another one that I’m really looking forward to seeing how the year pans out for her.” – Nat Grindal, Northern Knights talent operations lead.

“Delgado was a pillar in Northern’s defence for most of the year, able to take on the opposition’s best forward one-on-one or be set loose to intercept and spark rebounding forays. She was often tasked with taking the kick-ins and boasts a booming boot, which saw the Knights clear their lines time and time again.” – Michael Alvaro via “NAB League Girls team review: Northern Knights”

“With everything to gain late in the contest, Northern pulled the trigger and sent Delgado into the centre bounces – a move which ultimately played a massive part in the final result. Previously, the reliable top-ager was seen intercepting and rebounding in her usual defensive post, which proved key to Northern remaining a chance to turn around and win. At 173cm, her presence was then felt through midfield where she willed the ball forward and booted a crucial goal at the start of term four to spark Northern’s game-winning charge.” – Michael Alvaro via “Top Performers: NAB League Girls Round 6”