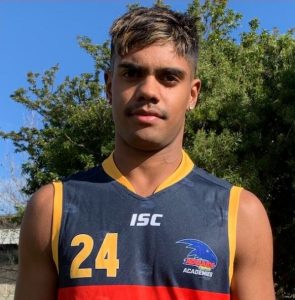 Tariek Newchurch is an explosive forward who is dangerous on the ground like a small, but also capable in the air as a leading half-forward. He showed good versatility for much of the 2020 season, stationed predominantly forward but also rotating through the midfield, where he used his explosiveness and evasive nous to provide some spark around stoppages. Despite spending most of his time forward, if he can develop his defensive game he could prove to be a very handy rotation player as the likes of Cam Rayner and Jack Martin have become for their respective sides. Newchurch is linked to the Adelaide Crows through its Next Generation Academy (NGA), but has garnered solid interest from other clubs nonetheless. He switched to Henley High in 2020 to complete his Year 12 studies, while also entering the AFL Academy and earning a National Combine invite for his efforts.

Newchurch enjoyed a solid bottom-age season for the Roosters playing mostly in the forward half, kicking 29 goals from his 17 games. Averaging 12 disposals per game, he even managed one outing in the Reserves. He played 10 games throughout the 2020 Under 18s season, booting 16 goals from an average of almost 15 disposals and four marks per game, but was unable to again crack the senior ranks.

Tackling is one area of his game he would like to improve so he can more effectively play as a small forward type that can apply defensive pressure. He averaged just over one tackle in his first six games this season, before turning it around to average 3.5 in his last four. That rate of improvement is a promising aspect of his overall skillset, while consistently performing at his peak may prove the next step in his development. Newchurch is the kind of player who attracts the ‘at his best’ hypothetical, as he is near-unstoppable in full flight. Two bags of three goals and a sole four-goal haul attest to that, and Newchurch’s game-winning ability.

Looking at his strengths, Newchurch is most ominous whenever he is around goals, as he has a knack of making something happen out of nothing. This is largely credit to his blistering speed and his ability to manoeuvre through traffic. These traits and his slippery evasive techniques in-tight could also contribute into him developing into a midfielder. Newchurch’s goal sense is also a key asset, with classy finishes from all angles part of his arsenal. Finishing consistency may another area of improvement though, moreso from set shots than in general play where snaps around the body are his MO.

Being tied to the Adelaide Crows as a NGA member means that potential development may not be a deciding factor in his draft placement, as he could be a player who can come in and make an immediate impact for the rebuilding Crows outfit. Providing a spark and getting on the scoreboard will be what he offers in the early stages of his career, though he still looks to be a more long-term prospect with inconsistencies to iron out and versatility to build.

The Crows will hope a bid for Newchurch comes after their current pick 29, placed in the middle of the second round. They would be able to comfortably match it either way, though it would not be surprising if a club places a bid for the exciting prospect before the Crows’ next selection (currently 44). You would expect Adelaide to match it at any range after pick 30, as Newchurch is the kind of player who gets people through the gates, not to mention he is one of their own. The former is exactly the allure which other clubs will see, and the Crows’ strong draft hand may have their rivals keen to keep them accountable outside of the first round.