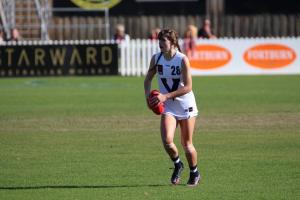 Tara Slender is a player who has been talked about as a top-end prospect for a number of years, having stood out at V/Line Cup and then coming through the Bendigo Pioneers program. As one of the AFL Women’s Academy members, Slender had an interrupted 2021 but showed off some unrivalled versatility.

Tara Slender is quite possibly the rarest of prospects going around in the sense that the key defender was able to not only add strings to her bow, but plenty of arrows in her quiver. Already being an outstanding contested mark and interceptor behind the play, Slender was thrown forward and then through the midfield in season 2021 in a bid to showcase just how versatile she was. Whilst at times being inside 50 at the Pioneers was difficult, Slender still pushed up the ground and was able to get involved in the play.

When in the midfield, Slender showed she could win plenty of the ball at ground level and at the coal face, not just on the lead or in flight. Against the Calder Cannons she had 28 disposals and looked every bit a midfielder. Whilst she is a natural key defender with her positioning, marking and ability to get into the right spots to intercept, there is little doubt an AFLW club could throw her anywhere. The big question will be her consistency, which has been something Slender has to keep working on, particularly closing the gap between her best and worst. When on fire, Slender is possibly the most damaging player going around, and once those games where she struggles to impact become less noticeable, then watch out.

Aside from her consistency, Slender has plenty going for her and her upside is something that will attract plenty of attention in the upcoming AFLW Draft. Her footy smarts and ball-winning abilities in any line on the field, make her a unicorn of such with few able to do what she can do, just about anywhere she plays.

“Despite a somewhat interrupted season for the AFL Women’s Academy member, playing only the five games due to injury and AFLW Under 19s Championships commitments, Slender still showed why she is a top-end prospect; stepping up from her role as a rebounding intercept defender, to be a forward and midfielder this year in a remarkable display of versatility. Arguably the NAB League Girls’ Most Valuable Player for her side, the Pioneers were a far better team with her in it, and averaging a massive 4.2 marks as well as 5.2 tackles along with her 16.2 disposals shows she has no trouble winning the ball in the air, one-on-one or at ground level. A natural leader co-captaining the Pioneers, Slender could fill any role at AFL Women’s level and has some great upside for the future as well.” – Peter Williams via “Draft Central AFLW Draft Power Rankings – Victorian Pool: June 2021”

“Arguably her best performance in the Country guernsey, Slender got involved early with her hunt for the footy in the front half impressive, jumping on any opponent with the ball in her area, even winning a free early for holding the ball, and following up with a well placed kick inside 50. That ball use and pressure work, especially second and third efforts, continued to be a highlight for the game, looking a consistent threat in the forward half, and whilst she didn’t get on the scoreboard she was able to set up a couple with that previously mentioned ball use at a high level even under pressure. It was also good to see that she was taking some contested grabs in the forward half. ” – Declan Reeve via “Top Performers – AFLW U19 Championships: Vic Country vs. Queensland”

“The Pioneers’ AFL Women’s Academy member had an up-and-down season due to concussion and injury, but still showed at her best she is not only one of the most talented players, but one of the most versatile as well. Capable of playing in defence, up forward or even through the midfield, Slender knows how to find the ball, can clunk marks and lay fierce tackles. With a high upside and plenty of room to slot into any role required of her, the Pioneers’ captain will be a highly sought-after talent ahead of the AFLW Draft.” – Peter Williams via “2021 NAB League Girls team review: Bendigo Pioneers”