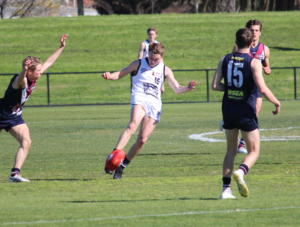 DRAFT ANALYSIS: “Bruhn is class with a capital ‘C’ yet does his best work on the inside, which makes him such a damaging midfield prospect.” – Peter Williams

If it is possible for a top 10 pick to be underrated, then Tanner Bruhn may well be just that. Considered somewhere in the lower end of the top 10, the classy inside midfielder has one of the more complete game profiles going around. The question marks might come on his durability, having only played the two NAB League games in his bottom-age year, but if you look at his upside that goes with his contested work and class, he is such a well-balanced prospect that with a full season, could well have been competing for the first overall pick.

Bruhn is a unique prospect because he is a hard and tough inside midfielder, but he has the class and ability that you would often see from a more outside player. He can dance around opponents without losing his cool with the ball, and also lay some bone-crunching tackles when mowing down an opponent at stoppages. He is such a well-balanced prospect that while he could improve his speed a little, he has that poise and composure with ball-in-hand to dispose of the ball before being caught.

Unfortunately injury ruled him out of most of the NAB League season last year, limiting him to just the two games for the Geelong Falcons. In those games he averaged 17 disposals, four tackles, five clearances, 4.5 inside 50s and booted three goals. He does not lack toughness around the ball, though he is still light, weighing in at 74kg. When he is able to further add extra muscle to his frame, he could be even more impactful on the inside and really compete against the bigger bodies at the elite level.

Despite winning a casual 72.7 per cent of his possessions at a stoppage with just six of his 34 touches coming from a handball receive, Bruhn averaged 67.6 per cent disposal efficiency. Stats can lie, but in this case they do not, he has the class and ability to dispose of the ball cleanly under pressure, often exiting a stoppage or creating something out of nothing in the forward half of the ground. If he had played in 2020, Bruhn could well have been thrown amongst the top few names in the draft, and he still will not take too long to come off the board.

At the elite level, Bruhn will likely play forward to start his career, before naturally progressing into the midfield where he will be able to influence both around the stoppages and up forward. If he can get a clean run at it as he has in 2020, albeit without games, then he could be a real value pick in the later selections of the top 10.

Bruhn is such a class act and it is hard seeing him slip outside the top 10. He has such a well-rounded game that his areas of improvement are able to be worked on, and they are not deficiencies in that sense. He might be a year or two off really hitting the big stage, but most clubs would be aware of just what he is capable of at his best.