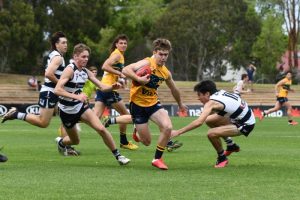 DRAFT ANALYSIS: “Schofield is a hard-working midfielder who is lethal on the outside with his sharp kicking ability” – Eli Duxson

Taj Schofield is a Port Adelaide father-son prospect who made the switch from Western Australia to South Australia, after earning All Australian honours at the 2018 Under 16 National Championships. Since then, he has joined Woodville-West Torrens’ and Henley High School, while making the South Australian Under 18 squad as a bottom-ager. He plays predominantly through the middle of the ground but does some of his best work as an outside receiver. He is often seen at either end of the ground to be utilised as a link player in attacking forays, or as a deliverer to leading forwards as he has shown capabilities on either side of his body. The son of Port premiership player Jarrad, Schofield has long been a highly-touted prospect and a mainstay in the AFL Academy pathway, thus earning a National Combine invite in 2020.

Schofield’s bottom-age season was impressive where he averaged a touch over 18 disposals and more than four tackles per game. He featured in the Under 17 Futures All-Stars game and even though he was a little quiet, he showed glimpses of his elite ball use and cleanliness at ground level while moving at pace. His 2020 season hardly deviated in terms of stats from the previous season, playing 12 games including finals. Unfortunately, he was ruled out early in two of them with hamstring niggles. He did not record a full game where had less than 15 disposals, but in his top-age season there were not too many big games from him in terms of accumulation. Schofield’s best effort came in Round 12 where he recorded 32 disposals, one goal, four clearances, and seven inside 50s. He did show more of a willingness to hit the scoreboard this season and that is an area he will look to continue to develop in the future.

With a 178cm and 72kg frame, Schofield’s size does not quite match up to some senior players and even to other prospects in his draft class, including 191cm teammate Caleb Poulter. He can continue to look to build on his strength and explosiveness, as well as his key weapon which is his slick ball use. He often relies more on agility and awareness, before spearing short kicks on the move. Building on that could allow him to become a role player for teams as he develops. Improvements to his strength and explosiveness will naturally better his inside game and ability to win his own football inside. He has typically found the ball in more uncontested situations and kicked at a higher rate than he handballed. His transition to AFL level will thus most likely start on the outer, or even up as a small flanker who can dart short and precise passes along the line while contributing at ground level.

To go with his disposal efficiency, ability to get around the ground, and move the ball forward, Schofield’s ability to gather below his knees and make quality decisions demonstrates his quality on the outside. The defensive pressure he applies around the contest is also key to this as it proves he is not just a front-runner, as he is prepared to tackle hard and smother. He has the potential to develop similarly to Brisbane’s Hugh McCluggage, who started predominately as slick wingman, but has started to become a first-rotation on-baller who gets regular shots on goals. While his disposal is usually sound, like McCluggage in recent times, refining that finished product under pressure is another area of improvement.

Having undoubtedly had their eyes on him for many years now, Port Adelaide recruiters will hope any potential bid for Schofield comes after their current pick 39 at the start of the third round. Not that it particularly matters as much in that range, but the Power have a strong amount of late picks to cover the deficit of Lachie Jones‘ probable first round bid, as well as one for Schofield later on. The bidding process tends to see club-aligned players slide a touch, so Schofield could loom as a value pick quite deep in the draft, especially given it may not last any more than 50-60 picks. His injury/durability concerns of late may also impact his range as clubs query consistency, but his natural skills and development in a variety of roles make him a handy prospect.