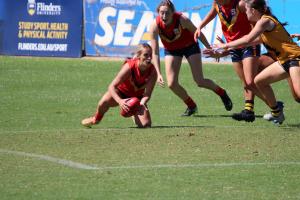 Tahlita Buethke is one of the most athletic players in the 2021 AFL Women’s Draft crop, with elite speed and endurance, as well as an appetite for contested ball.

Tahlita Buethke is an elite running machine who has come a long way in season 2021. After getting a taste for it last season, Buethke established herself as a best 22 player in the South Adelaide squad, balancing between outside and inside midfield.

Buethke has a high level balance of acceleration, endurance and evasion, able to burst away and leave her opponents behind. She sometimes can get herself into trouble, but has a fierce desire to win the ball at the coal face and burst away. A renowned tackler, Buethke has no issues getting her hands dirty either, and has good strength to win the ball in close and spread to the outside.

Despite not having as much SANFL Women’s experience as some others, Buethke has been gradually building more consistency within games, and whilst it is a work in progress, it has certainly come on in leaps and bounds. Earlier in the season, Buethke would be quiet for a half, then explode with multiple impacts in a short space of time, but towards the end, she was having moments more often than not and really putting her hand up for the AFL Women’s Draft.

Earning an AFL Women’s Draft Combine invite, Buethke showed both at state league level and the Under 19 Championships that she is able to maximise her potential to combine her athleticism with her footballing ability. Whilst the South Australian pool is one of the most competitive in the nation, Buethke certainly has a point of difference with her athletic balance and upside.

She might not be a day dot debutant, but Buethke has rapidly developed in 2021, and expect with further training and development she could continue her upward trajectory.

“Only managing the three games last year in her 18th year, Buethke became a regular fixture in the South Adelaide squad, to not miss a game when she was available – outside state representation – and really have more of an influence on games. For the first half of the SANFL Women’s season, Buethke might have had a quiet first half, then exploded, but once she returned from the AFL Women’s Under 19 Championships, Buethke went from a wing position onball and had 17 clearances in four weeks to show she was more than capable of standing up in any midfield role. Her burst of speed and athleticism as a whole are among the best in the draft crop, and she is building her consistency more with each game.” – Peter Williams via “Ones to Watch: AFLW Draft eligible surprise packets”

“Caught the eye once again with her speed and work rate, and whilst she was not always perfect – getting caught on occasions and then just spilling it, such as a bounce that went awry in the second term – she always looked dangerous when she was in the area. Her evasion and ability to get to repeat contests was impressive, and had a snap on the outside of the boot five minutes into the game which was a behind. She had another shot in the third term after burning off an opponent early, but the shot also just missed. Kept running hard throughout the contest.” – Peter Williams via “2021 Academy Watch: SANFL Women’s Semi-Finals”

“The athletic midfielder showed good explosive traits out of congestion, as she constantly looked to get on the move at stoppages and spark some forward momentum for South. While she fumbled a touch when over ground balls, Buethke proved an active participant at the contest and naturally faced forward once she prized the ball, which meant she could also wheel around and kick down the line. Kicking to targets and getting more purchase on each disposal are areas of development, but Buethke’s intent and effort cannot be faulted. She had a couple of key disposals late in the piece, with one a kick within the forward 50 which went towards the hot spot, but was intercepted.” – Michael Alvaro via “2021 Academy Watch: SANFL Women’s Round 11”