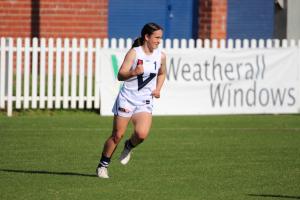 Tahlia Meier is also a high-level cricketer, representing her state in the sport. An AFLW Draft Combine invitee, Meier can play forward or midfield.

Tahlia Meier is a talented small forward who has added the midfield string to her bow more as the season went on. Able to win ground balls cleanly and quickly, she can draw free kicks with her hard-at-it approach.

She is clean by hand and hits targets well by foot, able to have that balance of offensive and defensive traits. Whilst not overly strong due to her size, Meier still cracks in and applies plenty of defensive acts.

Meier is a player that can be used in transition due to her evasion and skills, able to hit those sharp, short passes or handballs, drawing opponents along the way. Her consistent form in the first half of the NAB League Girls season was rewarded with a Vic Country spot, where she kicked three goals in her two games.

At the AFLW Under 19 Championships, Meier averaged 11.5 disposals, 2.5 marks and looked lively roaming up and down the ground, working hard for each of her touches.

Once the junior season was finished, Meier stepped up to the VFLW where she played three games for the Western Bulldogs and averaged five tackles per game in that time, able to show no fear against bigger and more experienced opponents.

As a dual sport athlete with both football and cricket at a high level, Meier has plenty of future options regardless of which way she opts to go over time. She has proven to adapt to multiple positions on the field, and whilst she is likely to settle in as a small forward, she can pinch hit up the ground, and still have an impact.

“The smallest player on this list and with an AFLW Draft Combine invite, Meier has come on in leaps and bounds this year. She has not only been able to hit the scoreboard as a forward, but progressed into the midfield where she finished the NAB League Girls season averaging 14.6 disposals, 2.6 marks and 3.0 tackles, as well as booting four goals in seven games. Stepping up to represent Vic Country, Meier did not look out of place back inside 50 and pushing up the ground, kicking three goals in her two outings. She has strong defensive pressure and good speed to evade opponents, with her contested work and versatility – being able to play both forward and midfield – a key to her success in 2021 and earning herself an AFLW Draft Combine invite.” – Peter Williams via “2021 AFLW Draft Positional Analysis: Small Midfielders/Forwards/Defenders”

“Meier built nicely into the season and by the end of it, became very hard to deny as a genuine prospect. As a forward, she showcased her ability to find the goals with four goals across the first three rounds, before proving her worth a little further afield and getting her hands on the ball at a good rate. She earned a spot in the Vic Country squad and is yet another Rebel to have also slotted into the Western Bulldogs’ VFLW program.” – Michael Alvaro via “2021 NAB League Girls team review: GWV Rebels”

“A standout small forwards performance on a big stage, Meier’s sense in the forward line with her crumbing and kicking for goal got her three majors for the day, proving that she can be opportunistic, but also win her own ball around packs, following up with her high class speed and agility to get into a goal kicking position. Read the ball well as it came inside 50, able to hit the front and centre of packs often, but time the run so she could get the ball if it spilled over the back easily. Pushed up into the midfield in the later stages of the game where that same speed and agility was a real weapon in getting the ball moving forward.” – Declan Reeve via “Top Performers – AFLW U19 Championships: Vic Country vs. Queensland”