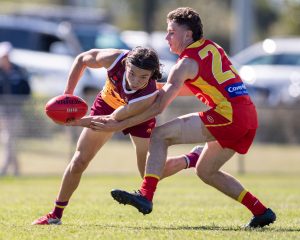 DRAFT ANALYSIS: “Abberley has improved his inside game in 2020 and remains a great late value pick in the draft.” – Peter Williams

Tahj Abberley is one of the players to earn a late call-up to the Queensland Draft Combine, which was hardly surprising considering his remarkable form this season in the QAFL. Moving from Aspley Hornets – who did not have a QAFL team in 2020 – to Wilston Grange, Abberley was able to be a standout performer in the midfield, earning the inside midfielder minutes he needed to take his game to the next level. He has a lot of top-end traits that stand out when watching him, with just a few more tweaks to make to push him into the next bracket.

Standing at just 180cm and 74kg, Abberley is a lighter midfielder who prior to this year was predominantly an outside type. His big improvement was winning more contested ball, though it is likely at senior level he will spend more time on the outside given his traits. He has nice speed and can take the game on, but his work this year was more about his inside decision making, where his clean hands – arguably his greatest strength – along with his execution and decision making through congestion were highlights. He showed great composure with ball-in-hand for Wilston Grange and despite being smaller and lighter than most opponents, was notably able to bounce up each time he got knocked down. Also possessing elite agility – topping the charts in the preseason with a sub 7.8-second time – as well as impressive bursts of speed, Abberley has plenty of athletic traits to match his footballing abilities.

Showing some great footy smarts, Abberley generally is able to make the right decisions by hand or foot, with his vision and ability to distribute by hand very impressive. In terms of his kicking, his long kicking is quite effective and he is able to hit the scoreboard and play forward, back, or through the midfield, making him a really versatile prospect. With his short kicking, it is an area of improvement, but not because it does not hit targets, more so to have greater impact by foot. Sometimes he can play it safe and go for the shorter, lateral pass rather than using his penetrating kick – which he possesses. His disposal efficiency remains high, but given the weapons he has, he could have much greater impact by foot.

Along with the impact, he will aim to add greater strength to his frame to compete at the next level. He has the traits to play inside or out, and his tackling pressure is superb. No matter the size of the opposition, Abberley will lay the tackle, and then with ball-in-hand pick the right option under pressure. He is a player that always has that get-out-of-jail kick to make sure his team retains possession which is important, it is just further using his weapons to greater advantage. In last year’s Academy Series, Abberley had some up and down performances, but he is an eye-catching player, and more often than not was one of Wilston Grange’s best. He is a player who could slot into a lineup and work hard to improve various areas of his game which he no doubt would.

Having earned a late call-up, Abberley is more of a late/rookie selection and with Brisbane Academy being so strong, there were already three players who had Combine invitations in Blake Coleman, Carter Michael and Saxon Crozier. In saying that, as we saw in the 2019 AFL Draft, there is no lock that Academy players end up at their own Academy, and Abberley has put in a body of work this season and deserves to be considered. He does have areas to work on, but it is more about giving him the green light and getting him into a specific role as he has shown he is more than up to the task.