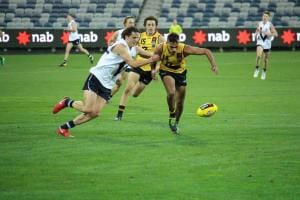 DRAFT ANALYSIS: " A player who has a tremendous appetite for hard work."

Perth Demons have supplied plenty of quality talent to the AFL system and this year is no different. While it was thought that Ian Hill and Luke English would be the main two candidates, Sydney Stack has emerged putting his hand up as a real contender come the draft.  The midfielder had a superb campaign averaging 23 disposals and eight tackles a game.

Stack was picked to represent WA for the second year running but his campaign got off to the worst possible fashion as he was dropped for the first game against South Australia for disciplinary reasons. Coach Peter Sumich said at the time that “Sydney Stack hasn’t been selected for this weekend’s Round 1 State 18s game in Adelaide because he hasn’t met our minimum training standards.” However knowing the character of the youngster, Sumich was sure that Stack would respond.

Stack did not let his state coach or teammates down, bouncing back in emphatic fashion earning All Australian honours for the carnival in the process putting him on the radar of many clubs. The 18 year-old also won the Jack Ensor Medal for best Colts player at Perth for the 2018 season and was selected on the wing in the WAFL Colts team of the year. An exceptional year for Stack was topped off when he played two games for the seniors which included a game against unbeaten premiers Subiaco in Round 21.

There is nothing particularly ‘sexy’ about laying a tackle. They do not often make the highlight reel unless they are a match saving effort. Basically it is a state of mind, you have to want to put your body on the line for your team. To average eight tackles a game is a fine effort at any level, and despite the Perth junior weighing in a bit over 70kg, when you get tackled by Stack you certainly know all about it. He loves the aggressive, physical side of the game and it certainly shows in the way he attacks the ball and the ball carrier.

Stack also has a real nose for the contest with the inside midfielder being an expert at winning the ball and then using his speed to break away from the contest. The 18 year-old is also a very good user of the ball and a quality decision maker. It is these traits that make him unique, because he has the desire to win the contested ball, but the skills to execute when on the outside. He is clean, quick and his high work rate makes him difficult to contain. All these traits make him a very interesting prospect ahead of the AFL National Draft.

Like his teammate Ian Hill, Stack is not the biggest when it comes to his physical build. The midfielder will be coming up against much bigger and seasoned bodies in senior footy and will have to find ways to adapt while not losing any of his key attributes.

Midfielders who are able to average a goal a game are worth their weight in gold. It is a work in progress for Stack as he averaged well below a goal a game in 2018. While admittedly he is a creator, his outside leg speed would be a real threat in the forward 50.

Midfielders are a prized commodity in AFL today and even more so when they are in red-hot form like Stack has been in 2018. There are always a bolter or two in every national draft and it would not surprise if Stack is in that category. He has plenty of attributes to make a real impact in the AFL and you can expect once he build more size to his frame he could be a really damaging prospect at the elite level. He can play a variety of roles both inside and out and use his fierce attack on the football and nice skills to hurt opposing teams throughout games. He might not be a walk-up starter from Round 1, but Stack does not seem to be too far away from senior football.