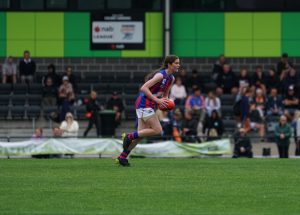 One of the smoothest movers and cleanest users of the footy in the pool, Reid has impressed in 2021 with her consistency and versatility, proving herself as an impactful player in the backline, forwardline and on a wing that can be extremely damaging with her penetrating left foot kick and marking around the ground.

Having the opportunity to show her versatility more and more as the season drew on, Reid started her 2021 campaign in the defensive 50, then moved into a midfield role and finished off playing almost exclusively as a forward, roaming up the ground to be a link up player when Oakleigh struggled to get it going forward, utilising her marking and kicking in particular across all three areas of the ground, topping the Disposal, Marks, Goals and Rebound 50’s count for the Oakleigh Chargers in the season despite the switching around, which is a strong sign of her consistency across all parts of the ground.

One of her other big strengths is her positioning around the ground across multiple roles, holding space and timing her run well as an outside receiver around the midfield, timing her leads well and showing strong patterns as a forward, and being where the ball is entering almost every time when in the defensive half, taking intercept marks and setting up play going forward with her penetrating kick.

She was played predominantly on the wing when representing Vic Metro at the U19 AFLW Championships, averaging 20 disposals, 5.5 marks and a goal in the two games against Vic Country and Western Australia, earning a debut with Collingwood VFLW after the Oakleigh Chargers premiership where she rotated from the midfield and defense, perhaps offering an insight into where she may play at the next level.

Mostly due to her role in the teams she was part of, Reid at times looked like she struggled with her inside game, particularly contested ball winning, as she aimed to be the receiver from contests, it’s hard to call this a weakness but is certainly an area that could do with some development at the next level to round out her game.

“A natural ball-winner with a slick left foot and smooth-moving ability, Reid has proven she can play on all three lines of the field. Starting off half-back and pushing up to a wing, Reid finished her season up forward and ended up slotting 15 goals in 11 games, including three in Oakleigh’s premiership win. She averaged 1.4 goals for the season from 20.1 disposals, 4.5 marks and 3.2 inside 50s per game, looked to as a key player to move the ball in transition. She used it well by hand or foot and was able to find space with ease. Multiple times a game Reid would make you wonder how she got in so much space even when tearing it up, but credit to her work rate and smarts to be able to find the open space and then punish the opposition through either her disposal or on the scoreboard.” – Peter Williams via “Draft Central AFLW Power Rankings Victorian Pool: June 2021”

“A versatile left-footer, Reid progressively moved up the ground as the season wore on; starting in the backline and spending a couple of rounds down there before progressing to the midfield for a few rounds, then spending the rest of the season in the forwardline, where she’d go on to be the side’s leading goal kicker. With that versatility comes a wide range of traits that will allow her to slot into whichever area the team she ends up at needs, with her speed, ball use by foot and ability to hold space three of her most impressive strengths. Representing Vic Metro, she was predominantly used on the wing, which perhaps offers some insight into where recruiters picture her playing long-term.” – Declan Reeve via “2021 NAB League Girls season review: Oakleigh Chargers”

“Another who has found a home up forward, Reid provided just the spark Oakleigh needed to break away and form an early lead. She was a reliable target up forward and with her combination of smarts and competitiveness, proved very difficult to beat when the ball came her way. Her two first quarter goals were crafty, latching onto the ball close to goal and finishing in quick time with aplomb to create genuine scoreboard pressure. She very nearly had a third in the same term, but hit the post, before posting that next major in term three with a snap. Her bag of three capped a run of six-consecutive games with at least one goal in style.” – Michael Alvaro via “Top Performers: 2021 NAB League Girls – Grand Final”