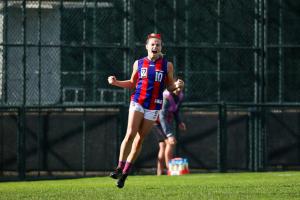 Sophie Locke is a former Murray Bushrangers and Vic Country defender who has been plying her trade up the other end for Port Melbourne in the VFL Women’s. Now a couple of seasons out of the NAB League Girls, Locke has come on in leaps and bounds, being one of the leading goalkickers in the VFLW.

Sophie Locke has always been a clever player when it came to footy smarts and knowing where to be at the right times. Often Locke would play a defensive role on opponents, negating a damaging forward, or go into the midfield and play the team role. Now inside 50, Locke has found her damaging niche, where she can use her smarts to advantage to regularly hit the scoreboard for the Borough.

Her defensive pressure, aggression at the ball carrier and desire to win the ball to provide teammates with a scoring opportunity are symbolic of a defender-turned-forward. She can kick majors from general play or set shots, with a reliable kick for goal as a whole. She can still build on her accumulation when the game is not going her team’s way, but her versatility as a whole allows Locke to be deployed in multiple roles, which is why she earned herself an AFLW Draft Combine invite.