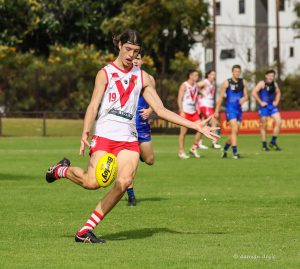 DRAFT ANALYSIS: “Neale is a raw ruckman/key forward who has an enormous upside, credit largely to his outstanding athleticism.” – Lenny Fogliani

Jandakot Jets junior, Shannon Neale is a ruckman who has shown an ability to push forward to become a significant aerial threat. In 2020, Neale averaged 13 possessions, 19 hit-outs, three inside 50s, three tackles, three marks and kicked three goals across eight games. His best games for South Fremantle came against East Fremantle in Round 1 (15 possessions, 15 hit-outs, seven marks, five inside 50s, one goal), Subiaco in Round 4 (20 possessions, 14 hit-outs, five inside 50s, four tackles, three marks, two goals), and Swan Districts in Round 5 (15 possessions, 21 hit-outs, four marks, three inside 50s). In 2019, he won South Fremantle’s Rising Star Award and South Fremantle’s Leading Goalkicker Award. Prior to committing to football with South Fremantle, Neale was a National 400m and 800m runner. Since, he has represented Western Australia at the 2019 Under 16 National Championships, played in the Under 17 Futures All-Star showcase, and ran out for this year’s Western Australia Under 18 All-Star clashes.

The former National 400m and 800m runner showcased his athletic prowess at the WA Combine, where he secured top-five results in the standing vertical jump (73cm), running vertical jumps (both over 86cm) and the 2km time trial (6:35 minutes). Neale utilises his athleticism on the football field, using his vertical jump to launch over other ruckmen in the ruck contests, but also to soar over defenders to take strong contested marks. Neale has good toe off the mark and gains handy separation on the lead too, ensuring he can provide a good lead-up option while stationed forward and diversify his play.

His athleticism also ties into being able to cover the ground well. Neale possesses the tank to be able to play like a fourth midfielder in the ruck, and is able to mark well around the ground. He looks to still be sharpening that tool, and could certainly benefit from utilising his running capacity to a greater extend while up forward, getting further up the ground to link his side into attack with marks down the line. Part of that is his developing football smarts and as quite a raw footballer, Neale will only get better in terms of football smarts with experience.

Other facets tied into the ‘raw’ tag are strength and consistency. Neale has filled out from 86kg to 91kg come season’s end and is clearly growing in the former department, but can always figure more consistently as he gains a greater understanding of his role. It is more a case of having an extended impact on games, rather than drifting in and contributing a few eye-catching plays. Neale’s durability will be extended with that added strength, lending to a higher level of consistency too. He spend a good deal of time on the sidelines with lower back issues in 2019, which he now seems to be over, and was robbed of the opportunity to make his Reserves debut in 2020 on account of an ankle injury.

While Neale is still raw, his upside is enormous and he could prove to be a draft bargain. This draft crop boasts a couple of ruck options within the first round, but Neale could be one of the premier picks a touch later on. His strong athletic base and steep rate of development bode for breakout form in future, and clubs will value the potential he has shown. In time, he looms as a player who could turn into the dominant rucks we know of today, who can clunk big marks, rotate forward, and cover the ground supremely well.

Depending on just how keen clubs are on securing a ruck option in this draft, Neale could go as early as in the late-second round. He is perhaps more likely to be picked up in the third round though, with would-be suitors evidently buoyed by his high ceiling and the improvements he has already made. Neale very much suits the mould as a project player and depending on which club takes him, may not be sighted for a couple of seasons as he builds his craft. The West Australian has spoken to both clubs in his home state and a bunch of others, so there is clearly interest in his potential. He could end up as a high value choice down the line, and may start his career as a specialist forward who pinch-hits in the ruck, again depending on which club he end up at.