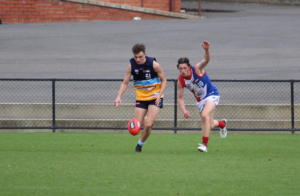 Seamus Mitchell is a clever small-medium forward from Bendigo Pioneers who has had limited exposure at NAB League level, but has come through the pathways as a nice developing talent. Standing at 181cm and 74kg, Mitchell had anticipated to play more up the ground having predominantly been that half-forward player in his five games for the Pioneers last year. In that time, Mitchell booted six goals, and it was his creativity and footy smarts that stuck out. While he needs to improve his cleanliness at ground level and consistency, Mitchell shapes as a nice prospect in this year’s AFL Draft.

Mitchell is an interesting prospect in this year’s AFL draft, providing clubs with the potential for a high-upside small-medium forward who has scope to progress into the midfield. He has a penetrating kick to go with those athletic traits, and has the footy smarts to use the ball well inside and outside the forward 50. His creativity is largely his greatest weapon with ball-in-hand, which lends itself to his footy smarts.

Looking at his ability with ball-in-hand, Mitchell has a short, sharp, penetrating kick that is highly effective when piercing through opposition zones looking for a target inside 50. When he has the ball, he can set plays up and given his burst speed – recording 2.88 seconds on the 20m sprint at the Victorian Draft Combine showing that off – he can also escape the clutches of opposition players.

He has similar top-end athletic traits with his vertical leap – 91cm running – and his agility as other features that stand out. Basically as good as he can be with ball-in-hand, his athletic traits are what make him eye-catching on the field. He is not a huge natural ball-winner, though it has to be said he played purely as a forward last season in his bottom-age year with the hope of pushing up and spending more time on a wing in 2020. Whilst that did not happen, and he does need to add that string of midfield ability to his bow, Mitchell has shown enough to suggest he could easily be that forward at the top level.

For all his strengths, Mitchell still has a number of areas to work on. He can be a bit fumbly at ground level, which he himself said in a preseason interview with Draft Central he wanted to work on. As a ground-level player, Mitchell will want to be a one-touch talent and it is a way to build his impact inside 50. Secondly, Mitchell only averaged the 1.8 tackles last year, which is not terrible, but for a smaller forward, defensive pressure is all the rage and while Mitchell has those skilful ball-in-hand traits, he can certainly add to his off-ball work, particularly given his set of athletic capabilities.

If his off-ball work can match that of his ball-in-hand work, then Mitchell has a lot to offer at the next level, given he has already produced a strong foundation to work with going forward.

At this stage Mitchell is likely to be a later draft or rookie selection, having had the limited exposure at the levels, though has successfully maintained his place in the pathway systems over the past few years. If he can clean up his ground level work and add more strings to his bow such as developing more of a midfield and defensive game, then he could loom as a value pick late in the draft.