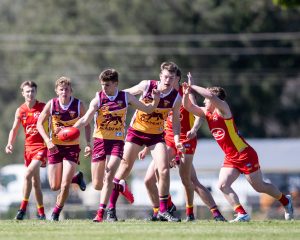 DRAFT ANALYSIS: “Crozier is a hard-running wingman that uses his fantastic fitness level to get to good positions and have an impact.” – Tom Cheesman

Saxon Crozier is a Brisbane Lions Academy prospect who played an important role in Morningside’s QAFL premiership team this season. He was one of the best players on the ground in the Panthers’ semi-final victory over Palm Beach Currumbin, then backed it up with another strong performance against Broadbeach in the Grand Final. The Queenslander has also been a mainstay in his state’s pathway program, while also turning out consistently for the Lions Academy. Crozier looked comfortable at all levels in 2020 and has put his best foot forward ahead of this year’s AFL Draft, with his clean hands work rate and composure with ball-in-hand. He has some areas to work on, but has grown five centimetres and put on 10kg in the past 18 months to go from 185cm and 70kg to 190cm and 80kg.

Crozier played as a wingman for Morningside this season. His ability to run hard both ways is his major strength, as he often works into space to earn uncontested possessions. When he pushes forward, Crozier often takes uncontested marks inside 50 and is a proven goalkicker. He has a lovely set shot action and reliable long kick. At stoppages, Crozier consistently positions himself well on the defensive side of the ball and does not get needlessly sucked into the contest. This enables him to push back and help his defence if his side loses the stoppage, but also allows him to spread quickly into space offensively when his side wins the ball. Once Crozier gets the ball in space, he creates link-up chains and uses run and carry to push the ball forward. He gets plenty of handball receives because his opponents struggle to go with him, and he collects a strong number of inside 50s and score involvements.

Crozier’s contested ball winning ability improved this season but will still be a work in progress, as he has clean hands and rarely fumbles. His composure under pressure is outstanding for a young player, and this was particularly evident early in the QAFL Grand Final when he was one of the few players not panicking under the increased intensity. Crozier’s calmness has led to him taking too long to get rid of the ball on occasions, so releasing the ball quicker is an area that he can improve with more senior football experience.

In general play, Crozier often gets involved in switches and seldom commits turnovers in dangerous areas of the ground. He has clearly mastered the art of controlling possession, as he regularly chips the ball around in the defensive half with teammates. This helped his side regain composure on numerous occasions when things weren’t going their way, and it was always handy in the last quarter to take some time off the clock when Morningside had the lead.

One aspect that he could build is his on-field speed, as he clocks up a sub three-second 20m sprint so has the capacity to really burn off opponents, but it is more through his work rate than speed that he does so. His inside ability and tackling remain as a couple of areas he can still work on too, as his outside game has a lot of ticks. Standing at 190cm, Crozier has a lot of upside and with his disposal more often than not impressive, he could be a value long-term pick.

It is difficult to predict where Crozier will fall on draft night. Brisbane has rights to him as an Academy member, but he is among two other key Academy prospects in Carter Michael and Morningside teammate Blake Coleman. As such, expect Crozier to be a later selection, but like we saw with Academy prospects last year, do not rule out another club swooping. He is a good size for a wingman and the fact he stood up in big games at the end of the season should work in his favour. It would be a surprise if he does not end up on Brisbane’s list for 2021.

What is IPVanish? How can it Job?

So why Choose AVG VPN?