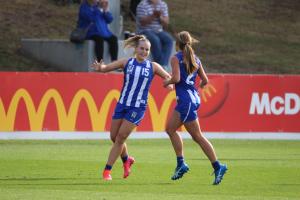 Sarah Skinner has been making the trek from Tasmania to Victoria each week to run out for North Melbourne for the VFLW and proved she could match it with quality opposition.

Sarah Skinner is one of North Melbourne’s Tasmanian contingent that flew across to play in the blue and white stripes in season 2021. Not only did she successfully make the step up from the TSL Women’s to the VFL Women’s, but she was one of the better players running around each week. Averaging 18 disposals, and around four clearances per game after transitioning from forward to the midfield, Skinner has put her name up as a genuine AFLW Draft prospect.

Being eligible under the Tasmanian link, North Melbourne has the first crack at selecting the talented utility, and there is plenty to like about her game. Firstly, her kicking is a huge strength, able to pinpoint passes around the ground well and identify where to put the ball going forward. She is strong overhead, can win the ball through the midfielder or up forward and her defensive traits are also impressive.

Averaging almost five tackles per game, Skinner is not afraid of getting her hands dirty and doing the team thing, and playing any role asked of her. Throw in the consistent season she has put together, and she has really carved out a good year to make AFLW clubs consider her ahead of the draft.

One knock on her game would be her speed, no the quickest by foot and therefore has to dispose of it quickly in general play, but her work rate to win the ball in space, mark and then assess her options helps her limit the impact that less speed has on her game.

Having the smarts around goal, Skinner is able to play as a deeper forward who can provide pressure, or straight into the middle and win the clearance or get the ball out to a teammate on the outside to run down the ground.

“Right from the opening minutes of the game, Skinner sprung into action as she took a mark – the first of many that the Tasmanian young gun produced throughout the game. Following on from her classy mark, Skinner booted a goal for her side to set up what would be a stellar performance. Skinner demonstrated poise as she was involved in a passage of play which saw her get possession of the ball before making her first handball for the quarter. Yet another touch for Skinner, this time through her second mark of the game.” – Ashleigh Matosevic via “2021 VFLW Player Focus: Sarah Skinner”

“Another VFLW player who might not have earned a Draft Combine invite but simply has to be in the mix to be drafted is a second Tasmanian playing for North Melbourne in Skinner. She has transitioned from being a forward and the TSLW’s best player and consistent talent, into one of the best in the VFLW, showing she can lift at any level. Still only 21-years-old, Skinner has had some huge numbers since primarily staying in the midfield, picking up 18.1 disposals, 3.8 marks and 4.8 tackles for the Roos. It is her ability to play forward or through the midfield and adapt to the play, creating goal scoring opportunities for either herself or her teammates. Skinner is a plug-and-play typer who the Roos would be considering, but other teams would have to be keeping an eye on too.” – Peter Williams via “Draft Central AFLW Draft Power Rankings – Victorian Pool: June 2021”