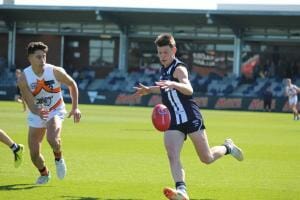 DRAFT ANALYSIS: "The most consistent player in the draft crop who is the safest selection and will be selected in the top two picks."

Sam Walsh is a name that even the average football watcher will recognise, with the talented midfielder having been a highly touted prospect throughout the year. After a superb bottom-age year, Walsh has backed up his 2017 with an equally impressive 2018, taking out most awards he could, winning the Larke Medal at the AFL National Under 18 Championships as the competition’s best player, despite Vic Country – the team he co-captained – heading home without a victory to its name. Walsh also won the Vic Country MVP, the Ben Mitchell Medal as the leading player in the AFL Academy, and was named captain of the Under-18 All Australian side in a growing list of accolades that is as good as any other player coming through in the draft crop. What makes Walsh stand out from the pack is his composure with ball in hand, his leadership to both bring teammates into the game and lead by example, and his consistency that shines through in every game he plays. Such is his impact on a game, even his quieter games are usually what most players would strive to achieve in a match. He wins the ball with ease, has great agility and endurance, and while he is not the fastest player out there, he does have that time and space component that means his speed is not a liability. Overall, if you are looking for a guaranteed 200-game player, Walsh is that lock, stock and barrel player who will excel in an elite environment.

It is not hard to reel off what makes Walsh such a high-end prospect. His endurance is elite, among the top few players in the competition, recording a 22.1 on the yo-yo test at the National Draft Combine, and his agility is almost as good, clocking in at an impressive 8.12 seconds, in the top 10 per cent of the draft prospects. Athletically, with the exception of speed, Walsh is in the top echelon of players that adds to his football smarts and natural ability. If you had to pinpoint what Walsh does with ball-in-hand that makes him stand out, it would be his composure. He has that time-stopping ability that we see which is often referred to as “Pendlebury-like”, where Walsh can stop and turn yet evade being tackled. Combined with his football IQ, Walsh is able to win the football and dispose of it without running into trouble, often holding onto the ball for an extra second or two in order to draw the opposition player to commit to a tackle or contact, and therefore release a teammate.

Walsh’s consistency is something to admire, with his lowest disposal tally of the TAC Cup season being 23 touches, a remarkable effort for the balanced midfielder who averaged 32 per game, with 30 or more in six of his 12 games. He wins 40 per cent of his possessions in a contest, and can play inside or out, but is most effective with ball in hand, so freeing up Walsh to win it via hands to dispose of it inside 50 is the key. There seems to be a dialogue around about his disposal efficiency which to be honest is a myth, because while there are better disposers of the ball, Walsh’s ability to go for the more challenging kicks to trouble the opposition make him a damaging ball user. He has the nous to be able to change his kick direction mid-action as he did at Mars Stadium against Calder Cannons in the Wildcard Round where he delivered the ball inside 50 to a teammate when he flicked it across his body after tricking his opponents into thinking he was kicking straight ahead. He opens up the game, and his ability to buy time and space through his top agility and composure allows him to break the game open through his disposal.

Finally, it goes without saying that Walsh’s leadership is a standout trait. He co-captained both Geelong Falcons and Vic Country and rarely gets flustered when opponents get in his face. On multiple occasions he copped attention from opposition players, Walsh ignores them and beats them with his actions. If he is being carefully watched, Walsh will look to use his teammates who have been freed up from the extra attention on himself. So all in all, if he cannot have a proper impact, he can raise the impact of others.

So Walsh has a dossier-length list of strengths, but every player in the AFL has areas to improve, in what ways can the top two pick improve? First off, his size – he is still quite light compared to other players – which is something clubs will look to improve over the off-season. This is just giving Walsh a solid gym routine to bulk up a little more when competing against senior bodies. Secondly, while Walsh’s kicking has improved quite a bit in season 2018, one area he could improve is his kick placement, which might sound a little strange given he can hit the remarkable passes that very few can do. But what can happen is he can often attempt some passes, expecting a bit too much of his teammates, such as a dart into an area that, for example a teammate could not quite get to, or put it too far in front. This is getting down to the nit picky now, but this is just an area Walsh can tighten up. Another way in which Walsh can improve, but it is not a huge concern is scoreboard impact. He booted 8.14 from 12 games, so he does miss a few chances, particularly on the run, so it is sharpening up his goal kicking when in general play, and if he can hit the scoreboard through a goal or two a game, it will further build his profile.

Sam Walsh is just about the complete player when it comes to midfielders. Along with Bailey Smith, Walsh has been touted as the top on-baller in the draft crop, and he has the composure, leadership and game smarts to easily adapt at AFL level. From everything we have heard, he will most likely not slip past Gold Coast at Pick 2, with Carlton likely to snaffle him with the top overall pick. For Blues fans, if Walsh makes his way to the club, he is a player that will shoulder the load through the midfield, and be that balanced player that is good with ball in hand and just wins the ball consistently. A real Rising Star chance next season as well because he could play from Round 1, especially once he can build extra muscle over the off-season.