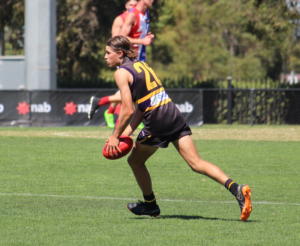 FOOTBALL is not the newcomer’s first sport of choice, coming from a basketball and cricket background. He found his way to the Bushrangers this year to play his first season in an elite program and showed some nice signs in patches, playing a balanced role through the midfield. At the State Draft Combine, Durham impressed with an 88cm running vertical leap and an 8.17-second agility test. These attributes make him a dangerous player whichever role Durham might find himself in, and he has generally played through the middle or in defence, but he is strong and confident at spoiling and has plenty of improvement left in his game. While being more raw than others given less time in the Bushrangers’ program, Durham is one that clubs might views as a longer-term prospect who can be moulded into a role that see him fulfilling for the future.