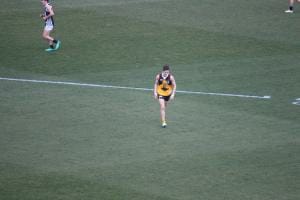 DRAFT ANALYSIS: "A draft bolter in every sense of the word, that has fantastic athleticism and plenty of scope for the future."

Sam Sturt is the definition of a draft bolter – a natural footballer with great athleticism having realised his potential through the APS football competition playing for Peninsula Grammar. Sturt’s dominance for Peninsula saw the groundswell of recruiter increase exponentially, and eventually earn him a call-up to the Dandenong Stingrays. Sturt was a crucial player in the Stingrays’ finals campaign, earning a flag off a handful of games, but creating plenty of headaches for opposition defenders. In the Grand Final, he was too quick for potential first round pick, Isaac Quaynor, and soon had a second opponent, Charlie Beasley. Sturt’s acceleration, agility and vertical jump make him incredibly hard to match-up on inside 50, and his goal smarts make him capable of bringing teammates into the game as well. He has plenty of scope, but is still raw, so the consistency going up to the next level may be varied. He does have a low endurance base, but once he can build a bigger tank, Sturt’s upside could be enormous.

Sturt’s athleticism – his acceleration, agility and vertical leap – is on show during each game, and he backed it up at the AFL National Draft Combine. He recorded a blistering 2.966-second 20m sprint, an 8.396 agility test and a 91cm running vertical jump, to be in the top 10, or in the case of the latter, the top player, in those areas. These traits also make him as dangerous in the air as on the ground, and he can win the ball in multiple ways. Often he will mark around half-forward leading out, and then use his precise boot to hit up a target inside 50, or take his chances going for goal. He has proven to be a neat set shot, and he has the game smarts to know when to back himself or when to pass off to a teammate. His strength overhead is another clear advantage he has, often taking marks with one grab while at top speed, which is a great sight to behold.

The fact he is a latecomer to the program means he has plenty of scope as well which is what makes him such an exciting prospect. Not too many players are such great athletes, while having the football nous and skills to back it up. It is so rare for a player to join a TAC Cup team and suddenly come into top 20 calculations, but that is exactly what Sturt has done. It does not mean he will get there, but he has gone from a diamond in the rough for some clubs, to being the most talked about prospect of the past month. He is no longer out of sight, and has dealt with the spotlight thrown upon him. At 188cm, Sturt is a nice size to play forward, and potentially clubs could use him through the midfield in times once his endurance base has grown. Overall, considering his lack of being in an elite program until late in the year, Sturt’s strengths are very impressive and his story is a feel-good one.

For all of Sturt’s strengths, there is still areas he can further develop, especially given the fact he has come from a long way back. He is still developing into himself and will have little areas to build upon and learn once he gets to AFL level. For example, with the anti-density rules in place at TAC Cup, Sturt thrives on the space to lead into, and the ability to gain distance on his opponent, something that will not always be afforded at the elite level. It is this, combined with his relative lack of versatility given he has only had the chance to play the one role that will have clubs keen to add more strings to his bow once he encounters more situations. He is a smart player, so chances are he can overcome any issues, but there are plenty of challenges for him to confront at AFL level. Finally, his endurance is the clear improvement he needs to make before he can impact at AFL level. It goes hand-in-hand with his role as a forward, and he will have to build his endurance base further.

Sam Sturt is a talented forward who is one of the best athletes in the draft crop. His strength overhead, combined with his speed, agility and vertical leap make him a danger in the air or at ground level, and his smarts and disposal by foot is top notch and once he is able to further improve his endurance and overcome any challenges thrown at him, Sturt will be a high-upside player with a long-term future.