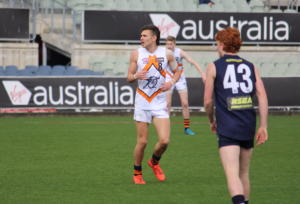 SAM Ramsay was co-best and fairest at the Cannons after a consistent year, but it was a self-proclaimed tale of two halves. Starting in an outside role across half-back and the wing that saw him declare his form “not good”, he returned inside where he became a dominant ball winner in a Cannons engine room with improving two-way balance. His second half of the season was incredible, averaging 31.4 disposals over his last eight NAB League outings and only dropping below the 30-mark with a season-high of 35 touches in Wildcard Round. Hitting the scoreboard from midfield and tackling hard, Ramsay showcased his complete midfield craft while also developing his inside ball skills to match his penetrating kick on the outside. At 72kg, he may well play outside until he adds strength, so will need to build both areas and refine his decision making to make best use of his damaging kick along the line, perhaps also lowering the eyes to hit shorter options. As a whole, Ramsay has shot himself into draft contention with his back-end of the season form that made clubs think twice about the accumulating midfielder.