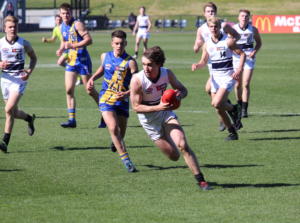 DRAFT ANALYSIS: “Philp is an inside bull whose stocks have risen steeply on the back of irresistible form and an athletic base which saw him earn a National Combine invite.”

NORTHERN Knights mainstay Sam Philp has a rare mix of speed and endurance that many inside midfielders aspire toward. His consistent NAB League form throughout the year was not quite enough to see him selected in the stacked Vic Metro squad, but a strong back-end helped him earn a National Combine invite. He shone at the fitness testing event, showcasing his powerful burst of speed with a combine-best 20m sprint time of 2.867 seconds, while also achieving top 10 scores in the yo-yo test and standing vertical jump. On the field, Philp wins his own ball and is most typically seen bustling out of congestion with his trademark speed and strength to generate some forward run. He is just as apt going the other way too, with Philp’s aggression translating to a fearsome tackling game on the rare occasion where he does not win the ball himself. A big improver from his bottom-age season, Philp has continued on the upward trend and could be the kind of player a club will seek to snap up earlier than expected given the upside his unique mix of traits brings.

Kicking outside of limitations
Outside game

Observing just a couple of centre bounces is enough to gain an understanding of how Philp plays and what his strengths are. They are obvious, with his aggression at the coalface suiting his inside role, but that elite athleticism and endurance helping him to be more than just an extractor. Philp’s clearance (5.95) and tackling (5.8) numbers in the elite category, but his contested ball ratio sits surprisingly at just under 50 per cent. This points toward a good work rate, made more obvious by his 21.5 yo-yo test score, with Philp’s spread away from stoppages allowing him to impact the play in all areas. That impact can still be heightened though, with many of Philp’s kicks coming short or to a safe option when distributing around the ground, limiting the damage his usually penetrating leg can have. Philp’s average 3.6 marks and 2.8 inside 50s are by no means low, but more of that forward penetration that can be seen from centre bounces would give him greater hurt factor. Saying his outside game is an improvement is somewhat a case of splitting hairs, but gives him room to grow and become a more complete player. Overall, Philp’s consistency is a large part of what helped him bolt into draft contention, and his ability to show his best traits in each game is a great asset. He got the ball a little over 22 times per outing and dropped below 20 disposals in just five of his 16 games, while also staying relevant when resting forward with a total of 10 goals. It is this mix of exciting traits and a sound base that sets Philp apart from stock-standard inside midfielders, eventually proving too good to refuse for AFL club recruiters. If a club is keen to snap him up, do not be surprised to see him taken early into the second round, but otherwise inevitably feature in the logjam afterwards.