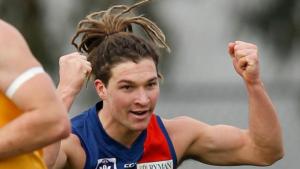 THE dreadlocked athletic forward from Coburg was a chance in the mid-season draft following 16 goals in seven games, including two bags of four in the opening four rounds. Unfortunately injury struck on the eve of the draft, Lowson missed his chance and in his four games upon return was not quite able to replicate his form. Has elite athleticism with a 2.93-second 20m sprint and 91cm running vertical leap, making him a really dynamic type with those much-heralded AFL traits. His best was evident in the first four VFL rounds this year, with Lowson’s 13 goals showcasing his ability to provide a focal point and find bunches of goals. His goalkicking accuracy could improve slightly though, with his 18.14 this year not doing total justice to his dominance at times.