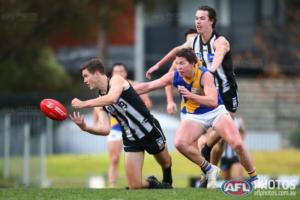 HAVING crossed from Northern Blues to Collingwood over the off-season, the key defender measured in at 194cm at the state combine rather than his pre-season listed height of 189cm. He is good overhead and has a presence at either end when a high ball comes in, adding great versatility, including a four-goal haul against Frankston in a best on ground performance mid-season. Has to build strength and a tank, making him a little in-between in the sense that his style of play is above his size. But given those kinds of intercept marking defenders are somewhat in vogue, Glover is a viable option for clubs willing to roll the dice on a player who can play multiple roles up either end with plenty of room to grow.