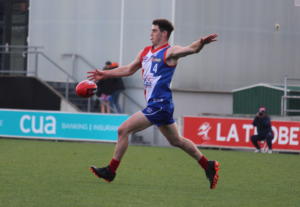 DRAFT ANALYSIS: "An explosive mid-forward with clean hands and a high X-factor, Flanders just has to build his consistency throughout matches to take his game to the next level."

A PLAYER with plenty of upside and some readymade attributes is Sam Flanders, a Gippsland Power talent who can fulfil the role as a dangerous forward or a damaging inside midfielder. In his bottom-age year, Flanders spent the majority of his time as a goalkicking forward, booting 19.19 from 12 games, before moving into a midfield role this year, but resting forward in bursts, booting 13.5 from the same amount of games. His attributes lend themselves to moving into this role at AFL level, with the potential top 10 pick able to explode out of a stoppage, give off a clean handball, or get forward and beat his opponent one-on-one in the air or at ground level. He showed during the finals series – most notably against Oakleigh Chargers in the qualifying final – that he is capable to winning the game off his own boot, slamming home four goals in a quarter to help his side to the lead at the main break, but it also showed an area of improvement – his four-quarter consistency which does come in and out of games with him being dominant at his best, and ineffectual during quiet periods. Overall, Flanders is a player with serious X-factor and strength that he applies both inside and up forward.

Flanders is a medium forward with enough strength to play midfield and shrug off opponents with a strong core, smarts and clean hands in close. He is able to feed balls out of congestion to teammates on the outside, regularly picking the right exit out of a stoppage, and best advantaging his team. His hands are his greatest asset when in midfield, coupling with his explosive power which while he clocks a three-second flat 20-metre sprint, is also helped with his sheer strength to burst away from opponents and gain some much needed separation on his opponents. The area, particularly through midfield, which he needs to work on his his kicking consistency, with Flanders sometimes putting ball to boot to gain distance or rushing his kicks going forward. When in front of the big sticks deep he is so damaging and when that can be mirrored in his field kicking, it would take his game to another level. With a contested possession rate of 52.6 per cent, Flanders is always winning the ball at the coalface, but he could still lift his 55.4 per cent kicking efficiency, as well as his set shot goal kicking. While he finished the year with an accurate 13 majors from 18 scoring shots, there were a few out on the full, and some inconsistency in the ball connection. Many of his goals can often come from general play, pouncing on an opportunity and making the most of it, or capitalising on an opposition turnover.

If you look purely at his forward craft, Flanders is one of the most damaging players inside 50. He has obvious X-factor, which he showed from the Under 16s days at Vic Country, but followed up last year with some memorable moments, including a bag at Queen Elizabeth Oval early in the season where he was kicking them from everywhere, and had he been more accurate, could have had a massive day out. Along with his X-factor, Flanders has a unique goal sense to be able to either apply scoreboard pressure or set up for his teammates. His one-on-ones make any opposition defender nervous, as the Chargers found out during the second term of the qualifying final. His body position and ability to move his opponent to where he wants him is admirable, and being able to clunk strong grabs is vitally important. Given his explosive power, Flanders can also beat his opponent on the lead, and therefore be a player who is hard to stop whatever the situation. Going to the next level should not be a problem for Flanders, it is just about ironing out the consistency in his kicking, goal kicking and throughout matches. In terms of his upside and attributes, the Gippsland Power mid-forward is right up there when it comes to excitement machines and match-winning capabilities.