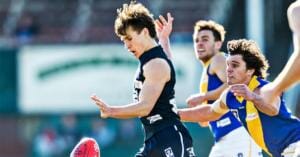 A FORMER Sydney Swans listed player who made the trek down to Victoria in search of reinvigorating his game and trying to force his way back onto an AFL list, Fisher has been a standout this year in the Northern Blues’ midfield. He uses the ball well, is clean and makes good decisions, with the medium midfielder just lacking athleticism with a 3.14-second 20m sprint and 8.82-second agility test. While his testing results leave something to be desired, Fisher’s consistent impact on games against AFL-level talent is much more complete, digging in at the coalface and drifting forward well to hit the scoreboard. He lead the clearance count in the VFL for 2019 and earned selection in the Team of the Year on the half-forward flank as the cherry on top.