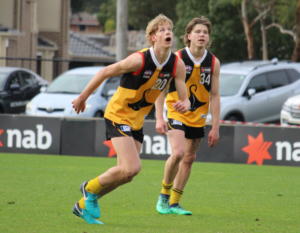 DRAFT ANALYSIS: “A raw and versatile key position player, De Koning shone on the big stage this year to join the leading pack in a draft short of tall options.”

AN athletic key position player who can impact up either end, Dandenong’s Sam De Koning has shades of his brother Tom’s potential. He is the same raw type who can dominate in the air at times, but has the extra arrow to his bow in being more versatile and having earned All Australian honours. Arguably looking most comfortable at centre half-back, De Koning rose meteorically in stocks on the back of performances in that role for Vic Country as he ruled the airways among a star studded back six. His four national carnival outings were crowned by a strong 16-disposal and five-mark performance in the ‘grand final’ game against Western Australia where he showed off all his best traits as the rock in an under-siege Country defence. De Koning clearly thrived with the step-up in competition, averaging more disposals (12.5), marks (4.8) and tackles (1.8) during the National Championships than in his 11 NAB League outings, where he was shuffled around a touch more and battled through an ankle injury which ruled him out of National Draft Combine testing.

De Koning’s best really came to the fore mid-year, looking a much more refined and confident player who enjoyed the consistency of the Vic Country squad. His high marking and ability to shut down quickly on opponents are both credit to his outstanding reading of the ball in flight, making De Koning that brick wall across centre-half back. He looked a lot more poised on the ball too, rebounding well out of defence and playing on his athleticism at ground level too. But De Koning is much more apt in the air, plucking the ball with high leaps and a reliable set of hands, while also making sound decisions on whether to mark or spoil – which is why one can never be too reliant on testing results with De Koning recording just a 59cm running vertical leap in the pre-season, but on-field he is more than capable in the air. He hardly missed a trick in that sense all year, and showed he could translate those valuable traits into good spurts all around the ground. While not nearly as dominant, De Koning had a couple of promising games for Dandenong up forward throughout the year, improving his positioning and forward craft to constantly get opportunities on goal. His final goal tally of 3.6 was highlighted by a two-goal haul against Geelong, with enough to suggest that he can grow into a swingman. His ability to pinch-hit in the ruck when required was also promising, but he will need to add some size to properly have an impact there at the next level.

Raw tall types often have more improvements to make than most and De Koning can grow in some familiar areas over time. His endurance is one of those areas, having turned in a 20.2 yo-yo score at pre-season testing. It is a little harsh given his on-field endurance is not overly bad, and a lot of talls fare worse in that area. By the same token, speed could be another improvement to make, but again is not such an issue in his position. That aside, arguably the biggest area for improvement for De Koning is his consistency. While his mid-season month of form was admirable, De Koning fell below eight disposals six times in the NAB League, with that 15-mark where he has his biggest impact. He seemed to have a pattern of two solid games, and then a couple of down outings, which should iron out with development in the elite system. But with a host of promising athletic traits and the potential to make the game his own, De Koning would be a perfect fit for a side with ageing talls who can aid his development before fully breaking into the senior system.