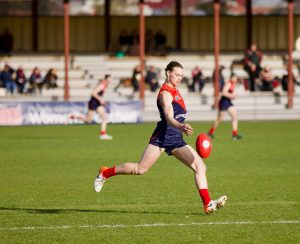 DRAFT ANALYSIS: “Collins is an intercept defender who could play in multiple positions, with an ability to take the game on.” – Peter Williams

Sam Collins is an exciting player who will divide a lot of draft boards. At his best, he is a really damaging defender who can run off half-back and penetrate by foot, but then at times his determination to run can often result in turnovers and scoring opportunities the other way. Make no mistake, he has the traits that will worry opposition players at the top level, and please coaches with his willingness to take the game on, it will just be tempering and learning the best times to do so in order to maximise his ability.

Collins stepped up in 2020 to follow on from his solid bottom-age year with the Tasmania Devils to be one of the top performers for North Hobart across the TSL season. Predominantly stationed at half-back, Collins could read the forward 50 entries like a picture book and is constantly able to get to the right places to intercept. Often he might float across as the third man or stand in the hole and put his body on the line, allowing for some strong overhead marking. In one-on-one situations, Collins is able to hold his own, or when he knows he can catch bigger players on the lead, he will allow them front position then come over and spoil. That is exactly how he played Jackson Callow who has about seven centimetres and 15 kilograms on him. Not keen to be involved in a wrestle, he would allow Callow front position, catch him on the lead and cleanly spoil, arguably taking the chocolates that day.

Aside from his aerial ability – where he averaged 5.2 marks in the TSL season of which 1.8 were intercept marks – Collins also possesses a penetrating kick. He can roost the ball more than 50 metres and can do so on the run, with that option a safer decision than his short kicking. He is not afraid to take the game on, but can sometimes bite off more than he can chew and try to look inside before there is a clear option, which results in a turnover and a scoring opportunity down the other end. No doubt once he can iron out the decision making and gain greater consistency with his kicking – which at times can look great – then he will be a lot more damaging as a result. More so to that fact is that he can play just about anywhere, going forward, or inside or outside if required.

In saying that, Collins certainly settled into his home at half-back for the Demons this season and it is where he is most natural. His ability to read the ball in flight, intercept, and then propel the ball forward is what he does so well, it is just the last step that can sometimes come undone. When forward, he still has the same courage and ability to attack the ball in the air, as well as look to apply a tackle or win the ground ball for his side. Overall he can be a Mr Fix It of sorts and fill a hole somewhere on the field for teams that need a determined player with plenty of traits to work with going forward.

Collins has a lot of desirable traits, and is one that could end up on a list somewhere in the second half of the draft. With list reductions it makes it hard for those not in the top group to have a greater idea for draft projection, but a team that is willing to gamble on Collins will likely have a low-risk, high-reward situation if they can develop the talented runner into a more consistently damaging defender.