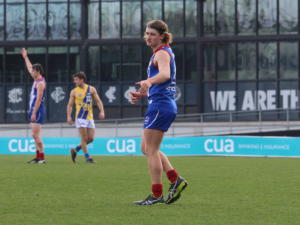 Sam Berry is a consistent inside midfielder from Gippsland Power who showed in his bottom-age year he can match it with older, taller opponents. He is more a traditional inside midfielder with great contested ball-winning abilities as well as being strong around the clearances and a relentless tackler that recorded as many as 18 tackles in a game, albeit in shocking wet weather conditions. Berry still has areas to iron out to improve certain aspects of his game, but had one of the more impressive bottom-age years in 2019.

Berry is a readymade developed player who is one of the few that could step straight into a senior line-up. With a high-level endurance base, Berry has no troubles running out full matches which is how he was able to slot into a spot in a midfield that had a plethora of draftable talent last year. Alongside Rising Star Caleb Serong and fellow first round pick Sam Flanders, Berry more than held his own, and even held that midfield together when the pair and others were away with Vic Country representation. While he did not make the Under 18 National Championships Vic Country side as a bottom-ager, he would have featured heavily in this year’s carnival had it gone ahead.

Berry’s contested work is what stands out in his game, with his fierce attack on the ball and consistent performances week-in, week-out a highlight. He averaged 17.7 disposals per game in 2019, not dipping below 12 touches in that time, and hitting the 20-disposal mark in five of his 10 games. Just as importantly, he had at least three tackles in every game, with five or more in seven of them, including his whopping 18-tackle game against Geelong Falcons. In that match he had 20 disposals – 17 contested – 18 tackles, nine clearances, two inside 50s, two rebounds and three goals to be best afield in an absolute slog fest. To finish the season, Berry averaged 6.5 tackles and 4.4 clearances, having four or more clearances in seven of his matches.

Berry still has areas to work on and it is not too much of a surprise for a hardened inside midfielder that kicking, particularly under pressure is an area he could build on. He sometimes rushes the ball or throws it on his boot from the stoppage, when the situation could use more composure or decision making by foot. He can be incredibly damaging by hand out of the stoppage, but by foot he averaged just the 48.5 per cent. A part of that is the fact he does not have the burst speed some others have, and whilst he has the evasion skills and endurance to power through opponents, he can rush the disposal. With some work on improving that burst speed, it would help give him an extra few split seconds to dispose of the ball.

At the 2020 Victorian Draft Combine, Berry produced elite numbers in both the 2km time trial (6:10) and the running vertical leap (94cm off his left), showing off what he capable of in the air. Whilst his role rarely allows him to utilise his aerial ability, it is handy to have. The time trial time was no surprise though with a tailwind that favoured the 20m sprint times, it made it more challenging for the 2km given the prospects had to run into the breeze for half of the time trial.

Overall though, Berry has a really strong profile for his role. As an inside midfielder he ticks a lot of the boxes and you can never fault his effort. He is one who could really have been tested against the best opponents in the country this year, but given his consistent 2019 season, it is anticipated a club will pounce at the opportunity for a person of his character and work ethic to walk through the doors. He could be comparable to a Will Brodie at AFL level with the bigger body and good inside work.

Berry is in that mid-draft logjam of players where clubs will rate him very differently depending on their needs. He is a consistent inside midfielder who certainly provides that strong body and inside presence on a consistent basis, and is more readymade than others in this year’s draft. he is most likely to be somewhere in the late second or third rounds, with a number of inside midfielders featuring in that region.