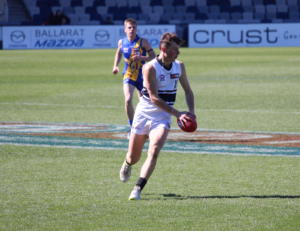 DRAFT ANALYSIS: “Capable of making an impact in multiple roles, Sturgess is a reliable prospect with the eye-catching element of high marking.”

NORTHERN Knights’ utility Ryan Sturgess enjoyed a consistent top-age season where he was tested in different roles at either end of the ground. A jack of all trades, Sturgess adjusted his usual defensive outlet role to spend time as an interceptor and rebounder in the back half, while also transitioning to become a high-flying forward when the Knights saw fit. His reliability and competitiveness in playing above his size saw him become a lock in the Vic Metro back six, eventually going on to earn a National Combine invite despite not testing through injury. He averaged 18.5 disposals, 5.8 marks, 3.8 rebounds and almost a goal per game in 13 NAB League outings, dropping only slightly to 14.8 disposals, 5.0 marks, and 3.25 rebounds during his four national carnival appearances. His deceptive athleticism across the board and upside make him a prospect who could push into third round contention, but he looks more likely to find a home later on at a club looking for a player solid contributor with points of difference.

Sturgess’ strengths tend to change in each role he plays, but one thing that stays true is his attitude. He is that in-between size at 189cm and 82kg, meaning that he had to use every bit of his competitiveness and aerial ability to match it with some of the more dangerous tall forwards from around the Country when suiting for Vic Metro. It was Sturgess’ competitiveness that helped him perform as a lockdown defender, with his assured uncontested disposal and knack of getting free to provide an outlet standing out in his time with the Knights. Up the other end of the ground was where the St Mary’s product’s high marking and athleticism really came to the fore – especially late in the season. After initially being swung forward in Round 1 where he snared a pair of goals, Sturgess began to start in the front six and did so to good effect against Gippsland with a three-goal haul. His best game arguably came against Western a month later, with Sturgess clunking a season-high twelve marks in a dominant aerial display despite not finding the goals. His attack on the ball and reading of it in flight were phenomenal, pointing toward that high half-forward role being arguably a better fit for showcasing his best traits. Sturgess’ athleticism is another solid area, testing well across the 20m sprint (3.07 seconds), agility test (8.22 seconds) and yo-yo test (21.1) to show the speed-endurance mix he has on-field.

In terms of improvements, it is a touch harsh to put up two areas which could otherwise be considered as strengths in that category, but they remain areas which can become better rounded nonetheless. While Sturgess’ kicking efficiency in the NAB League sits at an above average 72.8 per cent, much of that can be put down to the Knights’ high possession style in the back half and Sturgess’ uncontested possession rate of 68.9 per cent. He was found out at times with his acts under the heavier pressure of the National Championships, finding himself rushed in possession or behind at crucial moments. One of his other strengths, versatility, can also be countered as something to better nail down. While being a jack-of-all-trades is useful, knowing what you are going to get with later picks in the draft is usually the go-to. Still, Sturgess’ upside comes from that ability to grow in many roles, with a good athletic base helping that. Overall, he is a prospect who leads in the way he plays each role and will be one who can build on just being a reliable, competitive type.