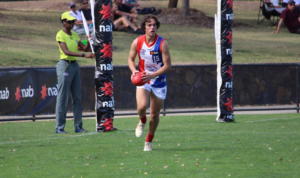 A HARD working winger with great competitiveness, Sparkes just keeps running throughout games despite not possessing top-end speed. He takes the game on and generally uses the ball pretty well, finding space around the ground to average 63.5 per cent by foot from 37.3 per cent contested. He has to build his inside game, but really improved this season with his work rate on show. While he is predominantly an outside ball winner, given his body size of 82kg, Sparkes has the capability of going inside, and his competitive nature lends to this. In 2019, Sparkes earned a spot with Vic Country and that helped propel him into draft calculations, not looking out of place and playing all four games for an average of 16.5 touches and 4.3 marks. Overall he is more of a late/rookie prospect, bu someone who provides good run, even if it is not break-neck speed.