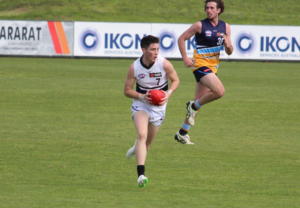 HIGHLY touted coming into the year, the talented outside midfielder had his fair share of injury concerns at the worst times in 2019, but still shared his time between school and NAB League competitions. A lightly built outside midfielder, Gardner has nice composure and good decision making, with a look to add an inside game to his repertoire, as well as add to his frame with time in the gym. He was unlucky not to feature for Vic Metro in his top-age year after doing so last season, struggling to truly come on and adapt his game to different roles after building a promising bottom-age resume. Could well be one to have a 19-year-old season in the NAB League to get a full run at it and prove his inside credentials – that is if clubs pass up on his promise this time around. Those outside traits are sure to attract some interest however and could be a value late draft selection.