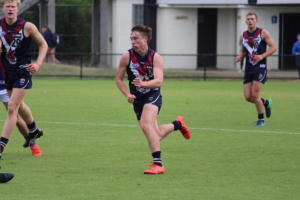 DRAFT ANALYSIS: “As consistent as they come, Byrnes is a hard-nosed and tireless small midfielder made of leadership material.”

YOU would be hard-pressed to find many more consistent Under-18 players in 2019 than Sandringham Dragons skipper, Ryan Byrnes. The competitive midfielder held his own in the star-studded Dragons midfield early on, before taking over to become the number one ball winner and earn a sole Vic Metro outing. He averaged 25.4 disposals across 15 NAB League outings after averaging a tick over 20 in his 12 bottom-age games, while also helping school side St Bede’s to its first ever Herald Sun Shield title. Importantly, he was the one to stand up across what was a disappointing finals series for Sandringham, not wavering from his usual output and displaying outstanding on-field leadership to cap off a great year. He may not have the eye-catching traits of some of his Sandringham and Vic Metro teammates, but Byrnes has quality in so many aspects and will provide great value for any team looking for a safe bet after the second round.

A typical passage of play from Byrnes usually involves aggressively prizing the contested ball, breaking clear with his deceptive pace and delivering inside 50. There lies Byrnes’ biggest strengths and one area of improvement, outlining his clearance winning ability and nippy five-step burst, with the all-important kick forward undoing his good work at times. Byrnes improved his 20m sprint time down to 3.024 seconds to really highlight that acceleration, but his testing results do not so-much credit his on-field agility or endurance. That is not to say he tested badly in those areas, but Byrnes’ agility in traffic and ability to cover the ground are both key features of his game. His work-rate bodes well for winning a good split of inside and outside ball, while solidifying his status as a true accumulator. You know what you are going to get from Byrnes too, as his effort is consistent over each week – having over 26 disposals in nine games and just one outlier of 13 touches. He managed to step it up in the finals as well, willing himself on to average 28 disposals across the three games while his side was down on form. One standout trait that Byrnes has compared to many others is his dual-sidedness which he shows time and time again when exciting a stoppage, able to lean to either side of his body to kick inside 50.

One of the areas Byrnes could further extend his game to is the scoreboard, with much of his play coming in setting up others. His kicking on the run needs improving, with the depth and accuracy not quite there as he breaks away towards the 50m arc. In adding penetration and a finished product, Byrnes could easily become an extremely damaging clearance winner who can bomb long goals from the middle. As it stands, Byrnes is a part of the raft of players hedged for selection just past the second round, but seems a hard-working type and will be sure to just sharpen up his game at the next level given he is already relatively solid across the board.