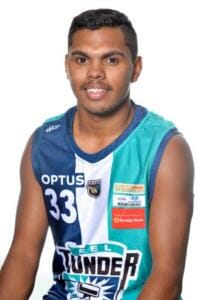 An overager who had strong form for Peel Thunder at the start of the season in the League side after crossIng from Swan Districts, and earned a place in Western Australia’s Under-18 Championships campaign. He managed two games at the National Championships to average nine disposals per game, then returned to the WAFL to play almost every League game in the back-end of the season, finishing at the Reserve grade. His promising form helped him earn a state combine invite, smashing all the athletic tests there – particularly the agility test (7.762 seconds). He uses those kinds of traits on-field too, applying great defensive pressure around the ball and providing a goal threat having found the big sticks in half of his WAFL outings this season. Bennell can look to work on having an extended impact with better endurance, which will in-turn aid his accumulation. It is tough for small forwards to pry their way into the elite system, but there are clubs at the moment looking to fill that position.