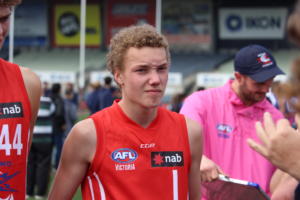 DRAFT ANALYSIS: “Angwin is a talented all-round prospect who might be lightly built, but has a ton of upside.” – Peter Williams

Ryan Angwin was a consistent performer for Gippsland Power in his bottom-age year, not needing to do too much each game to catch the eye, and was one of those players that is able to compete above his weight range. Standing at 184cm and just 72kg, Angwin is certainly lightly built, but shares some similarities with former Gippsland Power captain, Xavier Duursma. Like the now Port Adelaide youngster, Angwin does not have a lot of strength, but he still wins plenty of contested ball, often showing great courage in the air or at ground level. Believe it or not, Angwin put on size between 2019 and 2020, adding 10kg to his frame after weighing in at just 62kg at the start of 2019.

Angwin played 11 games for the Power in 2019, holding his own against bigger bodies and winning 48 per cent of his possessions in a contest. As a late-year birth – his 18th birthday is not until December 12 – Angwin effectively has an extra year of development to some others, and without his top-age year, he almost has an equivalent of an Under 16s season to compare to. Doing just that, the spindly midfielder is certainly ahead of expectations, and while he did not win a heap of the ball, he generally was able to use it fairly well with his footy smarts.

Angwin has an elite endurance base, showing it off with his remarkable 6:11 two-kilometre time trial, which was among the top five fastest recorded time at the AFL Draft Combines across the country. Adding in his three-second 20-metre sprint and 80cm running vertical leap, Angwin has enough athleticism to suggest that area will not hold him back in the future. One would expect that regardless of how much size he puts on, Angwin will predominantly play as an outside midfielder who can pinch-hit inside, with his work rate up and down the ground impressive. He could follow a similar path to Duursma with his career, though Angwin is a little more raw than the former first round pick.

If Angwin can continue to build his strength and improve his ball-winning abilities, then he has the contested numbers and impact to suggest he can have a consistent output. He is not afraid to receive contact from bigger opponents, and can pull down some strong grabs, averaging 2.6 marks in season 2020. He only had the two games with more than 15 touches, but even when he did not win much of the ball in the terrible wet conditions against Geelong Falcons at Shepley Oval, showed his class with a massive hanger. It summed up how he can catch the eye with a highlight here or there, or a moment that fans can walk away remembering him for.

Angwin is quite raw at this stage, so is expected to land in the later end of the draft. However, given his natural ability and upside, combined with his athleticism, it would also not be a surprise to see him plucked out as early as the second round if he fits the bill for a certain team. He is the definition of a long-term prospect, but one who will be worth the wait, as there are not too many 72kg players who can win 48 per cent of their touches in contested situations, which shows what he could do with a couple of years building greater strength.