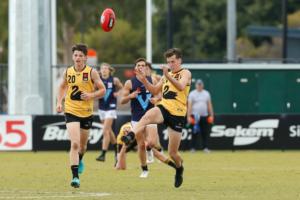 DRAFT ANALYSIS: "A consistent inside midfielder who is a natural born leader with improvement to come in his outside game and scoreboard impact."

RONIN O’ Connor is a inside midfielder with a tenacious appetite for the contest. 2019 has been a watermark year for the youngster as he was part of the Western Australia Under 18s champion winning side as well as captaining Claremont to the 2019 WAFL Colts premiership. The 18-year-old also got a taste of Reserves action for the Tigers late in the season. Tackling is a big sign of effort, it does not make many highlight packages but it sets the tone for his teammates to follow. Despite not being a massive accumulator of disposals, O’Connor makes sure that he sets a high standard in that regard. That, along with his leadership, work rate and inside game ability allows him to be a valuable later draft prospect. He does have to build his outside game and hit the scoreboard more often, but is one of those players who has speed to burn which will help him develop that aspect of his game.

The Marist youngster is the perfect height for a modern day midfielder at 191cm and is solidly built at 83kg. Being a two-way runner you need a good level of endurance and O’Connor tested solidly – with room for improvement – at the National Draft Combine. He can still improve in the area, but he is building that endurance to go with his 20-metre sprint time of 2.987 seconds which caught the eye. His ability to transform that into his game will be valuable for an inside midfielder.

O’Connor played all four games in the Under 18s carnival where he was extremely solid averaging 14 disposals, five tackles, three marks, two clearances and two inside 50s. In a game against Vic Country, the midfielder was in the thick of the action with 16 disposals and 11 tackles. In the four finals games that Claremont played in 2019, O’Connor averaged 17 disposals, two marks, two inside 50s and six tackles in his typically understated fashion.

Having the title of premiership captain is noteworthy at whatever level that you play at, and being a young leader and playing at a consistent level is something that recruiters will certainly take note of. Having the build and football awareness that he has, O’Connor is also capable of playing a role off half-back which is a handy attribute to have in today’s football.

Conversely, what may count against the 18-year-old is that there is not one area that makes you go ‘wow’. That is certainly not a criticism of his game, but recruiters often look for something that stands out from the pack. What O’ Connor lacks in that regard, he makes up for with his effort, as you know what you are going to get from him every time he steps onto the field. He ticks a lot of boxes, particularly regarding his inside game, and once he can add more strings to his bow in terms of his outside work, he can become a more versatile player and play a strong role at the top level.