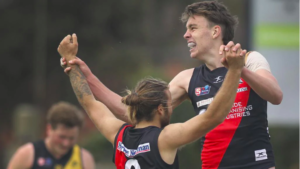 Key position stocks within the 2020 draft class have been identified as strong from a long way out, and West Adelaide’s Riley Thilthorpe is one of the many talls staking his claim as a top five draft candidate. The 200cm talent is renowned for his coverage of the ground, combined with strong marking ability, and the versatility to be employed in a range of roles. Having contributed to South Australia’s Under 16 National Championships victory in 2018, Thilthorpe continued his promising form at SANFL Under 18s level, before breaking through for six League outings as a bottom-ager in 2019. The 18-year-old has been a mainstay in Westies’ senior side ever since, managing a further nine games this year before being struck down by injury. While he is mostly sighted up forward for the Bloods, Thilthorpe has also enjoyed time in the ruck and even out on a wing.

Thilthorpe suits the modern-day game as a tall in the sense that he has many strings to his bow. He is one of those players who has the ‘for his size’ tag attached to him when speaking of his ground level work and running capacity, but remains true to his height when competing aerially, too. While viewed predominantly as a key forward prospect by recruiters, Thilthorpe’s MO as a ruckman is to act as somewhat of a fourth midfielder, boasting the mobility to play on-ball and compete around the ground. He also uses his long strides to provide a lead-up target along the line while stationed up forward, which is where that aerial prowess comes in.

He is somewhat dependant on his usual height advantage at 200cm, and perhaps lacks a touch of strength when competing against some of the monster rucks at senior level. That may be why his forward craft is viewed more admirably, though his length also comes in handy when marking the ball at its highest point. Combined with his reach, it allows Thilthorpe to get a hand in at the least and then sweep up quickly at ground level with smarts and clean hands. Building the power to explode vertically and crash packs, rather than stand up in them will be the next step for Thilthorpe in providing a more well-rounded aerial game. He seems to be faring quite well in that department nonetheless, averaging four marks per his nine League appearances in 2020.

Something which has been a slight concern for Thilthorpe is his durability, as he has spent periods at the beginning and end of this year on the sidelines. Niggling groin complaints kept him out of the West Adelaide side after Round 9 and halted a return, while also seeing him miss the South Australian combine on September 30. It is something which may also hinder his efforts to build greater speed and agility.

Though, when he is out on the park, Thilthorpe is difficult to miss. As a key forward, he ticks the box of being able to mark on the lead and kick goals, but there could well be more to unpack as the youngster progresses at AFL level. With an extended run and a few preseasons under his belt, Thilthorpe could turn into another dominant ruck of the Brodie Grundy mould, or even as a rotating type like Rowan Marshall across multiple positions. While pegged as a top 10 prospect with senior experience under his belt, the South Australian may be a long-term choice in that regard.

Adelaide currently lays claim to pick one, and the local lure of Thilthorpe has many Crows fans keen to get a home-grown talent through the door. Should the Crows look elsewhere before jumping on Thilthorpe’s potential, he could well be taken by the time their next pick (eight) comes around. The likes of North Melbourne (two), Hawthorn (four), and Essendon (six) would be wise to seek long-term cover in the key forward slot, so he is a chance to land at a range of clubs within the top 10 as it stands. Recruiters may be mixed in terms of where he stands, but if he slides down the order – perhaps due to durability concerns – and Adelaide fails to pick him up, there may well be a riot. He seems most likely to be taken by one of the four clubs mentioned, within the top 10 selections.