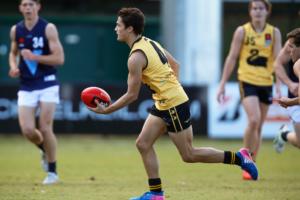 DRAFT ANALYSIS: "A tough and uncompromising midfielder, Garcia has footy smarts and knows how win the ball in close or on the outside."

RILEY Garcia comes into the 2019 draft as a fascinating case study. At his best, the 18-year-old Swan Districts midfielder is a prolific ball winner who is not afraid of mixing it up with those a lot bigger than him in the heat of a midfield battle. The youngster has a terrific blend to his game where he can play on the inside or outside which will surely excite recruiters.

While the overall package is an exciting one, the lingering doubt may come regarding his fitness. Garcia sustained a serious knee injury in the Under-18 national carnival just as he was building a highly impressive body of work for his draft year. The injury is likely to see the midfielder on the sidelines for a large part of the 2020 season. It is never timely to pick up such an injury, but even more so when you are on the cusp of your AFL dream. On the face of things, the reward far outweighs any risk on Garcia, but recruiters have many things that they have to tick off on, and rightly so as there is a lot at stake.

Garcia is one tough youngster, but being so lightly framed (176cm,70kg) he will unquestionably have to bulk up a fair bit to survive the big knocks of senior footy in the position he plays. The silver lining over his injury is that he can use the time in rehab to get his body into tip top shape. Garcia got a taste of senior action to start his 2019 season, playing three games and certainly not looking out of place. The midfielder averaged 12 disposals, two tackles and one mark in those fixtures with his standout game coming in round two against East Perth where he picked up 16 disposals and three inside 50s.

After that priceless piece of experience, Garcia returned to the Colts for a hit-out before getting himself prepared for the Under 18 carnival. In 2018, Garcia had worked his way up from being a train-on squad member to part of the main squad. But his experience was somewhat forgettable as he suffered a freak broken arm in his first during the second quarter of his first match against Vic Metro, therefore not allowing him to make a real impression.

The manner of that setback fed Garcia’s determination to have a big carnival in 2019 and he certainly did that. While the Black Swans had a fine carnival, Garcia’s best performance came in a loss against South Australia in wet conditions at Optus Stadium. He amassed 28 possessions (15 contested), eight clearances, six inside 50s and a goal. He also had 21 disposals, seven clearances, four inside 50s and four tackles against Vic Metro and another 20-plus disposal game against the Allies. With everything seemingly moving in a forward direction, to do his knee was a shattering blow for all concerned. Due to his injury, he was unable to participate in any activities in the AFL combine, but the fact that he was invited means that there is a considerable level of interest in him.