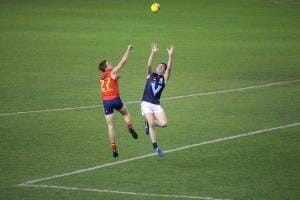 Riley Collier-Dawkins had a solid year last year as a bottom-ager playing through the midfield, he looked set to become a decent medium size midfielder standing at 188cm but a pre-season growth spurt turned the midfielder into a genuine tall midfielder in the mould of Patrick Cripps and Marcus Bontempelli. The comparisons were easy to make, being a tall inside midfielder but his playing style is more akin to Clayton Oliver as an explosive stoppage midfielder who prefers to handball over kicking. Collier-Dawkins made an impression early in the year, in wet and windy conditions down in Frankston he showed his ability to win the contested ball and it was his clean hands despite the weather that also caught the eye. Collier-Dawkins represented Vic Metro in the National Under 18 Championships, and while he did not dominate, he still showed of all his impressive traits in stages. It was an up and down year for Collier-Dawkins, but he hit form at the right time to be arguably Oakleigh’s best midfielder in the TAC Cup finals.

Collier-Dawkins growth spurt has only enhanced his already impressive attributes, he is a player that never fumbles and wins the ball when it is there to be won. He will often win the footy and then get a clean handball out to a running player or take the ball himself and use his speed to run away with the ball which is even more impressive considering his size. Collier-Dawkins is always on the move when he receives the ball which makes him hard to contain at stoppages. He will often get his arms up straight away but with his strength and speed it would be intriguing to see what would happened if he decided to use a Martin style “don’t-argue” instead of always getting his arms up to release a handball.

Due to his height, Collier-Dawkins was often used as a tall forward which was something he struggled to get used to at first but once the TAC Cup finals came around, he started to show some promising signs especially with his overhead marking and ability to get separation on the lead with his impressive speed. His speed and movement through traffic is very noticeable especially when you add in his size, he is genuinely exciting to watch through the midfield when he is up and going.

Collier-Dawkins has struggled to win big numbers in the TAC Cup, despite his contested ability at stoppages he has often drifted out of games or had extremely quiet quarters during matches although he has often either started on the bench or rotated forward more often than his fellow midfielders. Collier-Dawkins would do well at winning the ball at stoppages but would struggle to win the ball in transition which most of the highly ranked midfielders in this draft have no issues with. This has a lot to do with his below average endurance base, he was in the bottom 20 per cent in the 2km time trial at the National Draft Combine and this will be an area he will need to improve to become an effective midfielder at AFL level.

Collier-Dawkins is one of the most interesting and exciting players in this years draft pool as he has all the traits of a tall and explosive midfielder which are now all the rage. The productivity is not fully there yet due to his low endurance base but that can be worked on and with his mix of attributes he could become one of the best players to come from this draft if his talent is maximised to its fullest. Collier-Dawkins plays the modern game well with his clean hands, size and speed all key features for the modern midfielder and he seems to have a great attitude and looks willing to do the work to make the most of an AFL career. The upside is enormous and he may just be one of those players that everyone wonders why he went so late in the draft.