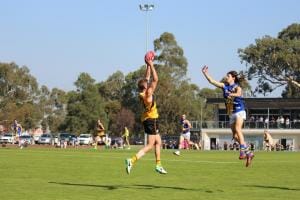 DRAFT ANALYSIS: "A ruckman who is smart at stoppages, and can drift forward to kick a goal."

Riley Bowman is a ruckman in a draft crop devoid of quality talents at stoppages, and the big man from Dandenong Stingrays looms as a prospects clubs looking to fill a void in that department could use. Bowman won a premiership with the Stingrays this season and has had the luxury of rotating between the ruck and forward, playing at Vic Country alongside fellow ruck/forwards Bailey Williams and Bailey Schmidt, while sharing ruck duties at the Stingrays with the likes of Stephen Cumming, and the aforementioned. Bowman is the most proficient ruck of the lot, with his smarts and positioning at stoppages a clear strength to his game. In season 2018, he has been able to go forward and kick a goal per game which has been important, and he saved his best until last, with a ripper game in the TAC Cup Grand Final, amassing 13 disposals, six marks, 22 hitouts, three clearances, five inside 50s, three rebounds, three tackles and a goal in what was a memorable performance for Bowman. He is not the most athletic of players in terms of speed, agility or endurance, and he does have some areas he can build upon including consistency and forward craft, but he can hit the scoreboard and provide that resting ruck option up forward.

Bowman’s best position is unsurprisingly in the ruck, where he has a tendency to dominate opponents, particularly those who are smaller in stature, or have less ruck smarts than the Stingrays tall. He positions himself well at throw-ins, and out-bodies his opponent through planting his feet and then directing his taps to his midfielders’ advantage. For a ruck, he does not have a high vertical leap, in fact he recorded 54cm at the pre-season testing for standing vertical jump, but he negates opposition rucks through his body positioning and smarts to just get to the right position and hold his ground.

He averaged 16.5 hitouts per game in season 2018 for the Stingrays in the TAC Cup and while that might not seem a lot for a ruck, he was often rucking only 50 per cent of the time with the high amount of ruckman in the team at the club. In the National AFL Under 18 Championships, Bowman averaged 22 hitouts per game, playing as the sole ruck, with only chop outs from Bailey Williams and the like. He is not a huge accumulator of the ball, but can win a clearance, averaging two per game at the championships, and three per game in the TAC Cup. Furthermore, Bowman does have the ability to play up forward and kick a goal, and while he can improve that area of the game, he is good resting out of the square and taking a grab, with a solid set shot routine. He finished the year with 15.11 from 15 games.

Bowman has a few areas in which he can improve, because while he has a real solid foundation to be a good ruck choice in the 2018 AFL National Draft, he can improve both athletically and up forward. At times he can improve leading patterns – which looked a lot better in the TAC Cup Grand Final – and have more of an impact when resting forward. The other ruck/forwards at Dandenong tend to have more of an impact forward, while Bowman is more of the ruck resting forward type. There is a lot more growth in terms of game sense up forward Bowman can develop, which is a good thing for an AFL club. The major tick is the fact that Bowman can play that permanent ruck role, and do enough to provide a target down forward. If he can develop his forward craft more, then he can be more damaging when resting there. To be able to ruck for a longer period of time, Bowman will need to build his endurance, having recorded 20.4 on the Yo-yo test in the pre-season testing, while his speed (3.2 seconds in 20m sprint) and agility (9.062 seconds in agility test) could also improve. It is his endurance and forward craft however, that would be the next step for Bowman.

Riley Bowman is one of the top ruck prospects in the 2018 AFL Draft crop. Arguably he and Kieren Briggs are the only two sole ruck prospects who will come into consideration early in the AFL National Draft, and depending on where clubs need talls, Bowman will likely slot in somewhere in the middle of the draft. He was seen as an early prospect at the start of the season, but with the emphasis on talls sliding, and the fact that like we saw with Sam Hayes last season, if clubs are not out for a ruck, talls can be left until late. But the fact there are so few rucks available means a club might pounce early. Regardless, Bowman offers a solid base as a ruckman, who with development on his forward craft and athleticism, can develop into a nice prospect.