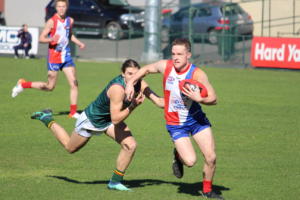 DRAFT ANALYSIS: "A hard working, smart midfielder/forward who knows how to move around stoppages, and also go forward and hit the scoreboard."

ONE of the smarter stoppage midfielders who will likely be a later draft choice in the 2019 AFL Draft is Riley Baldi, whose stoppage nous, footy IQ and work rate are among his strengths that he can offer to an AFL club at the next level. What Baldi showed this year, is an ability to return from injury and have an impact not only through midfield, but also up forward. He can play inside and outside making him a balanced midfielder, because of his ability to spread from the contest to the wings, and then rest forward for stints to try and impact the scoreboard. While his strengths make him a valuable prospect, his athleticism, endurance, size and kicking consistency still needs improving, which are reasons why he is likely to be a later draft choice this year.

The smart midfielder/forward knows where to stand and how to move at stoppages, reading the ruck taps well and being able to find spaces in opposition midfields. While he can tend to throw the ball on the boot or just dispose of it to space, he is a first possession winner when on the inside, and then a player who can also find space on the outside and drive the ball inside 50. When inside 50, Baldi can be a marking target, or a player who can pounce at ground level, snapping goals or converting set shots with relative security. His versatility to play between midfield and forward makes him a prospect who could develop into either role, likely to be a forward pocket to start with given his lower endurance base (20.6 on the yo-yo test). While the result was not the worst yo-yo test, it is certainly an area that needs improving for a player who is born to be a full-time midfielder. At 180cm, Baldi is also on the shorter side for inside midfielders, which is why he can also develop as an outside one, but if he does that, then kicking consistency (55.9 per cent efficiency from 35.5 contested rate) needs to improve. This is arguably the crux of where clubs will look to develop, depending on the role they wish him to play at AFL level. If it is to be inside, then building his endurance and speed – a 3.16-second 20m sprint at the combine attests to that – is the go. If it is to be outside, then his kicking consistency – as well as speed – is the more important aspects. These are all areas that can be developed over time, and another reason why Baldi will likely start as a small forward.

Aside from his improvements, Baldi’s ability to win the ball at the stoppage and extract it through hard running and agility – which is his best athletic trait – is what helps him manoeuvre out of trouble. He has the smarts to get to the right positions and then move the ball on, with his decision making generally good, it is just his execution that as already mentioned could develop. But any midfielder that can go forward and kick a couple of crucial goals, roam up the ground to play on the wing and then double back to rest forward and provide a target again, is a valuable commodity. There is no doubting Baldi’s superb work rate that sees him push himself to his limits each game, and often he finds plenty of the ball doing so. He has little bursts through the inside, then rests forward and helps his side in any way he can. Baldi is a player who if he can build his athletic profile and endurance, as well as iron out his kicking, could play multiple roles within an AFL side.