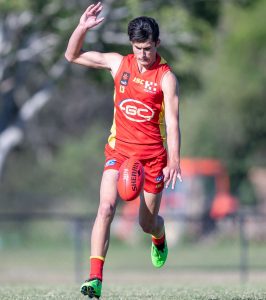 DRAFT ANALYSIS: “Nicholls is a quick, clean midfielder/defender who showed some promising signs in 2020.” – Peter Williams

Rhys Nicholls is a tall midfielder who rotated between the wing and defence for Labrador in the 2020 QAFL season. Boasting some elite speed, Nicholls has that ability to create separation between himself and his opponents, whilst also having clean hands in the air or at ground level. He has a number of areas to work on such as his disposal consistency and his endurance, but has some nice traits that catch the eye.

Nicholls is a player who can certainly impact the contest, particularly in the air. Standing at 188cm and 79kg, Nicholls has the size to beat most forwards when given the small-medium types. With a sub three-second 20-metre sprint emphasising his speed, Nicholls is capable of providing the crucial run and carry that many teams look for. Often, he is taking a strong intercept mark at half-back then running away to gain vital metres for his side down the field.

At times he might do a touch too much and get caught or hit a kick that is not there, but when he is on-song he can be damaging with his ball use. He needs to improve his endurance to have a real consistent impact across four quarters, and it will improve his overall game. There is little doubt he will have a crack regardless of his endurance levels though, as he has aggression for the ball and ball carrier. It can sometimes get him into trouble – he was sent off in the QAFL this year – but it is also a trait that can earn him plaudits from his teammates and coaches for never giving in.

Nicholls is one of those prospects who has a well balanced game between his offensive and defensive impact. He can win the ball in the air or at ground level, and then rebound out of defence going long down the ground. Having a good day at the Draft Combine testing with his 2.96-second 20m sprint, Nicholls was also solid with a 75cm running vertical jump, though his strength in the air – more so than leap itself – is what helps him stand out when competing for contested marks. He did record 7:07 on the 2km time trial which is in the lower end of the scale, but with a full preseason behind him at an elite level and building that base, he is someone who could improve with the traits he has.

As a clean left-foot kick, Nicholls is one of those players who might be taken prior to the AFL Draft itself. As a later prospect, Nicholls is eligible to be pre-listed by Gold Coast Suns under their Academy concessions. With the Suns set to take Alex Davies and Joel Jeffrey at a minimum, list numbers may depend how the remainder of their picks fall. Nonetheless, Nicholls has put himself right in contention to be drafted, be it by the Suns or another club in the open AFL Draft.