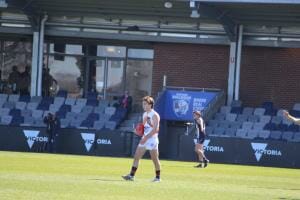 DRAFT ANALYSIS: "A Western Bulldogs father-son prospect who can be damaging through the midfield or up forward with great athleticism"

Rhylee West is a prospect who Western Bulldogs fans will have been tracking for a few years now. The nuggety inside midfielder has developed as his top-age year has gone on, improving in a number of areas, and becoming a genuine first round prospect. West’s work around the stoppages, particularly in the forward half, is arguably the most damaging of any player in the draft crop. He has the capability of going forward and having an impact on the scoreboard due to his strength and super vertical leap. West is unbelievably agile, and this helps both with and without the ball, and if he can iron out some of the question marks – such as overusing the football at times and improve on his endurance – then he will undoubtedly become a fixture in the Bulldogs’ side. He stands at just 180cm, and will likely start out as a forward at AFL level before progressing into the midfield.

West has a number of strengths that make him a promising prospect heading into November’s National AFL Draft. The thing with West is, his strengths are very clear strengths and he has the ability to impact a contest through the middle of the ground or up forward. When on the ball, West knows how to read the taps from his ruck, and so often this season he was seen cruising through a forward stoppage, winning the ball and then snapping around his body or running into goal for a major. While the stats might read that he did not kick an awful lot of goals, he spent most of his time at St Kevin’s this season, where he spent a lot of time forward. He has a running vertical leap of 80cm, and his pre-season agility test result of 8.164 seconds, ranks as elite and it shows with his movement through stoppages.

The knock on him despite his strengths is his height – at just 180cm, the prototype inside midfielder is growing into almost key position height. However given West’s work through congestion and his strength, he could still play a role on the inside, but could be just as suited up forward as a pressure forward who can kick a couple of goals a game. He averaged 4.8 clearances and 4.3 inside 50s per game, and only 12.3 per cent of his kicks resulted in a direct turnover to the opposition. While he still has plenty to improve on, he wins his own ball – 52 per cent of his possessions are won under pressure – and he gets forward to hit the scoreboard (1.2 goals per game). For a smaller player, he also lays a lot of tackles, with 5.8 per game in his six games, having that defensive pressure and hard edge to his game. Sometimes he can live on the edge a bit, and cost the odd free kick, but he is likely to be the player that supporters love because he bleeds for the jumper.

West’s two main improvements are areas that can be worked on under coaches at the elite level. His endurance is straight forward – a full-preseason will continue to build on what he undoubtedly has improved on since the start of the year when he recorded 20.7 on the yo-yo test. The second improvement is one that he has been noticeably better at as the season goes on, and will be something to watch. He can tend to overuse the football by firing away handballs behind his head or going for low percentage plays. He has some great strengths, and it is about harnessing those strengths, without overdoing it too much. Likewise, his kicking could also improve, averaging 53 per cent by foot, but winning a lot in the contest means he will have a fair few ineffective kicks. His clanger total is low, with most kicks often going to contests, and it is another area that has improved as the season has worn on. West has a number of improvements, but no doubt will be diligent in working on them.

Rhylee West is a small inside midfielder/forward who will likely start inside 50 once he lands at the Western Bulldogs – who are expected to match a bid somewhere in the first or second rounds. The compensation pick for Luke Dahlhaus should help with points for matching the bid, and while West does have some improvements to make, his strengths are pretty impressive. Bulldogs fans will in particular enjoy his ability to read stoppages, work his way through traffic and hit the scoreboard, while also laying plenty of tackles. West has that “white-line fever” that some players have, and while it can be costly at times, he is the player that every teammate would love to have on his side, and he is not afraid to match it with much taller players.