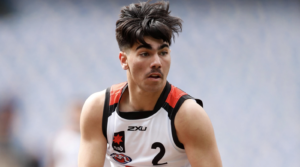 RHAI-ARN Cox was the AFL Under-16 National Championships hero – winning the game against Vic Country with a towering mark and goal after the siren in 2017. A feature in the 2018 Under-17 Futures showcase game, it was a surprise to many to see that Cox would not be included in the West Australian Under-18 squad considering the talent he had already showcased. While he has had challenges over the past 12 months, Cox returned in the back-end of the season to play nine WAFL games – six Colts and three Reserves – where he kicked 11 goals and showed the X-factor he exhibited as and Under-16s talent. A prodigious prospect with huge natural skill, Cox has already been compared to the likes of Sydney Stack in terms of pathways to the top, and he certainly has the talent to be considered among the best of his age.