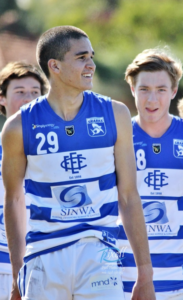 THE developing key forward is a long-term prospect for AFL clubs, with McGuire possessing a neat vertical leap that clubs could harness for the future. He was an Under-16 state squad member, going on now to predominantly play as a key forward in the WAFL Colts competition where he found the goals in four outings across 2019. McGuire only managed the six goals overall in 14 games this year, also spending time in the ruck to average 10.1 hitouts with a high of 27 in Round 8. Far from the finished product, McGuire has a high work rate but lacks speed and will be a project player who could thrive in a good system given his willingness to work hard and his adaptable vertical leap. He may be a little undersized for a genuine ruck/forward at the next level, but has plenty of time to grow and expand his game.