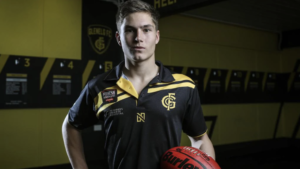 A pint-sized midfielder at 177cm, Kuller burst onto the scene this year and had an outstanding season. He played just eight Under 18s games for Glenelg, but that did not stop him winning the club best and fairest. He then made the step up to Reserves level with another six outings there, not looking out of place to average over 19 touches. With serious competitiveness, good ball use and the ability to rack up the ball on the inside and outside, as well as average 7.8 tackles per game, he is one who has come on in leaps and bounds having now fully committed to his footballing dream. The travel undergone from his home town of Mt Gambier just to pull on the yellow and black this year will also make him favourable to clubs outside of South Australia, on top of his overall rate of improvement.