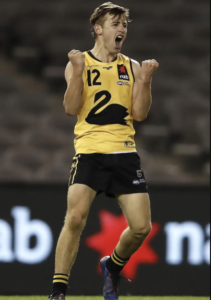 YOU may remember the name from Western Australia’s final Under-18 Championships match against Vic Country, where the cool and composed Clarke delivered the game-winning goal after the siren to win the game for the Black Ducks. He is a work horse with elite endurance, recording an equal-national high of 21.8 on the yo-yo test at the state combine and using his huge tank to work on the spread with marks around the ground and effort at the coalface. His high numbers in marks typify his overall game with effort going both ways, and Clarke has a good knack of finding pockets of space – just like when he drifted forward against Vic Country to find the match-winning goal. The knock on him as an inside midfielder, or midfielder in general will be his size at 175cm and 70kg, but Clarke is more than capable of finding the ball and did not fall below 20 disposals at Colts level. Later breaking into the Reserves side at Perth, Clarke will be known to many keen watchers of the Under 18 competitions.