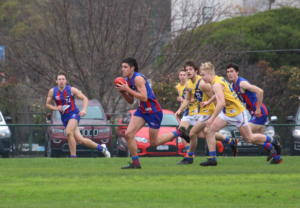 DRAFT ANALYSIS: “McInnes is a strong inside midfielder with great athletic capabilities and tied to Collingwood through the Next-Generation Academy.” – Peter Williams

Reef McInnes is a big-bodied inside midfielder who is tied to Collingwood through the Next Generation Academy and one that Pies fans have been talking about for 12 months. Whilst he will naturally progress through to become that inside midfielder – he has all the traits to do so – McInnes spent the majority of his bottom-age year as either a marking forward or rebounding defender, showing off his versatility. It is no surprise he could slot into just about any role and is one that is tipped to cost the Pies a top 30 pick.

McInnes has quite a number of impressive traits that standout when on the field. For starters, his strength and power on the inside is a big plus for his role in the future, particularly when he already has the size at 192cm and 84kg in the preseason. Many might cite his 36.2 per cent contested ball-winning rate as not reflective of an inside midfielder and they would be right. McInnes predominantly played outside, usually forward or even in defence for the finals series last year, as the likes of Matt Rowell, Noah Anderson and Will Phillips took the prime inside roles at Oakleigh Chargers. Make no mistake, McInnes would have teamed up with Phillips on-ball this season and made a pretty damaging duo – when they did not have school football commitments – and by not playing in 2020 the Pies might be able to get him for value.

His hands on the inside are as clean as they come, averaging 89.5 per cent efficiency and often he is quick-thinking with his ability to win the ball in close and pick the right exit with a teammate running on the outside. He has a long handball projection which can be placed just perfectly for teammates to run onto, preferring to keep his teammates on the move rather than handballing to stationary targets. When it comes to his kicking, it could improve. He is not a ball butcher as such, but it is inconsistent in the sense that he has the penetration by foot, but sometimes the execution can be off. It is an area that is not too great of a concern for the future, but it will be something the Magpies look at building – along with his consistency – if and when he lands there.

Aside from the on-field strengths, McInnes also has some great athletic prowess for a bigger bodied player. His agility and speed in particular is very impressive, and whilst he did not test in the 2020 preseason due to injury, he clocked a mid-boggling 2.78-second 20m sprint at the AFL Draft Combine. Whilst his agility test was not great at 8.68 seconds, it was not indicative of what he can do on the field, with his evasion and power able to work his way through congestion. Overall, he has that nice blend of athleticism and strength that make him tough to contain on the inside, and then add his versatility to be thrown just about anywhere on the ground and he has a lot going for him.

McInnes’ range has been a real talking point, and at the time of publishing, the Magpies held picks 14 and 16. It is anticipated he will slide past both, though Collingwood is expected to complete some more deals to move up the order, and potentially grab another pick later in the top 30 to be able to match the inside midfielder. It might be little solace to Magpies fans after a disappointing trade period, but it is worth noting McInnes shares similar traits to Adam Treloar, though is bigger and stronger, just without the runs on the board. If he can be given a chance as a forward and then develop into a midfielder, McInnes could develop into a top talent given his size and upside.