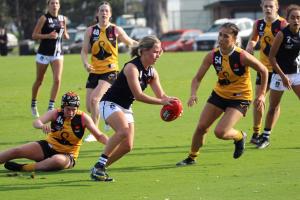 Poppy Schaap is a pocket rocket that packs plenty of punch and has a lot of exciting traits which lend themselves to being a handy player at the next level. With some of the cleanest hands going around and her ability to create opportunities out of nothing inside 50, Schaap has the defensive pressure to match her offensive impact.

Poppy Schaap stands at just 153cm, but plays to her strengths when inside 50 or through the midfield. Naturally she can get outmarked by taller players and can often rush her kicks or not quite pinpoint them where she might like them, but she has so many quality traits that clubs should overlook her size. The smallest player to receive and AFLW Draft Combine invite, Schaap has fantastic evasion and knows where to stand or run to win the ball. Her damaging impact inside 50 had opposition teams keeping a close eye on her around the forward stoppages, particularly with her goal sense.

A renowned tackler with a team-first mindset, Schaap can win the ball herself or be ready with the handball receive to open up the play for teammates. She has the ability to find plenty of it when in midfield, and then get to the right spots inside 50. Sometimes she was left unguarded because she knows how to find the space, enabling her to take uncontested marks inside 50, which is credit to her footy IQ. Too often opponents would get sucked into the contest and Schaap would sneak out the back to then create the extra number close to goal.

Her forward craft and ability to snap across her body when given an extra second was on show time and time again for both the Falcons and Vic Country. Since transitioning into that more permanent forward with midfield stints – rather than the other way around – Schaap consistently hit the scoreboard and became a danger for opposition sides, not wanting the ball to get to ground level given Schaap’s quick thinking and super clean hands.

“A really impressive small midfielder, Schaap might be the smallest one going around at 153cm, but she packs a punch and has some unbelievable traits. Her best trait is her clean hands, rarely making a fumble at ground level and able to dish off to teammates in order to create goal-scoring opportunities. As a forward, Schaap slotted eight goals in nine games, often finding space where few could to snap around her body in big moments. She also slotted three goals in her three Vic Country games at the AFLW Under 19 Championships, and laid plenty pf tackles along the way. Her defensive pressure is right up there with her other key strengths, though it is hard to look past her ball-winning skills, composure and goal sense, and is a perfect pressure forward who can push up into the midfield.” – Peter Williams via “2021 AFLW Draft Positional Analysis: Small Midfielders/Forwards/Defenders”

“Utilising her speed and agility through traffic, Schaap proved to be one of the more ‘X-Factor’ players of the competition. As a small forward, she was still able to rack up big numbers, even moreso when thrown into the midfield. It was her ball use in the forward half especially that would be her biggest weapon, spotting out kicks to leading targets or handballing to outside runners to keep the ball moving. Not afraid to take on bigger opponents either, Schaap played the role of a pressure forward extremely well, tackling any player that came into her area. She was able to maintain that output at Vic Country Under19s level as well.” – Declan Reeve via “2021 NAB League Girls team review: Geelong Falcons”

“One of the Falcons’ most hard-working players, Schaap was very nearly the fire starter for Geelong in term one. She started brightly with a well finished snap to ensure Geelong could reply to Oakleigh’s scoreboard pressure, and looked dangerous inside 50 with her combination of tackling pressure and smarts on the ball. She would go on to work up the ground and even spend some time back in midfield, transferring her pressure game against classy opposition. Schaap again got on the board with another sharp finish around the corner in the third quarter, but her feats weren’t quite enough to incite a Falcons comeback.” – Michael Alvaro via “Top Performers: 2021 NAB League Girls – Grand Final”