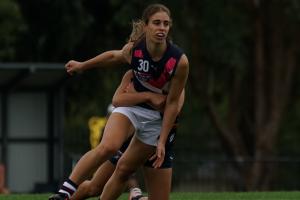 Playing across all thirds of the ground at NAB League level and the AFLW U19 Championships, Pia Staltari presents as a versatile prospect with clean ball use by foot and hand, as well as good speed, being some of the weapons she utilises to damage opposition moving forward. Originally from Western Australia, the former State Under 15s and Under 16s representative has nominated her home state for the 2021 Draft.

Having played in essentially every role there is throughout 2021, there’s no doubt about Pia Staltari’s versatility and ability to impact in every position, with some of the cleanest disposal in the draft class she can regularly get 40 to 50 meters behind her kicks with good penetration, combined with her speed and willingness to take on opponents, she regularly covers a lot of ground with just one possession. A fierce tackler and switched on with her two-way running, Staltari makes life hard for opponents trying to get away from her and win the ball, especially in the midfield around stoppages.

Representing Vic Metro in the AFLW U19s Championships, Staltari featured predominantly in the forward line where she managed a goal a game to go along with her 4 disposals and 3 tackles, proving how damaging she can be even without a lot of touches, but also how willing she is to work hard defensively even when in an offensive role.

Staltari can sometimes phase in and out of games, which will be something she’ll look to iron out over the coming years to consistently stay involved in games, giving her the best opportunity to help the team with her offensive weapons

“Tried in a variety of positions, Staltari stood out with her clean hands and ball use while playing on each third. Starting as a high half-back, she proved classy on the ball for Sandringham, before being switched up the other end and through midfield in the run-in to Vic Metro duties. When able to find the goals, she did so in style with kicking usually a key strength of her game and making her one of the region’s most promising 18th-year prospects.” – Michael Alvaro via “2021 NAB League Girls team review: Sandringham Dragons”

“Having been tried in a range of positions for Sandringham and Vic Metro, Staltari was a permanent midfield fixture on Sunday and showed her class at times. She had little trouble getting first hands to the ball at stoppages, but still looks a touch more comfortable on the outer where she can better utilise her classy disposal. Staltari had a good moment in the final term, running down Sophia McCarthy in the corridor for a holding the ball free kick, ending her game on a high.” – Michael Alvaro via “Top Performers: 2021 NAB League Girls – Round 9”