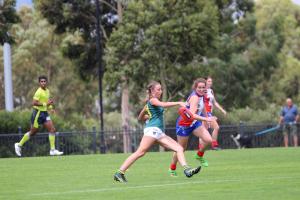 Perri King was the sole Tasmanian AFL Women’s Academy member this year, and it was easy to see why she was included in the prestigious group of talented footballers. Possessing a great balance of inside and outside traits, King has come on in leaps and bounds over the past 18 months.

Perri King made history as the inaugural goal kicker of the Tasmania Devils’ NAB League Girls side in 2020, but has become much more than a name on a history board. King has developed into one of the premier midfielders in that competition, and stepped up to represent the Allies at the AFL Women’s Under 19 Championships. Whilst still ironing out some areas to tweak and become a better player, King has so much upside and determination to become the best possible player she can be in the future.

Starting with her athletic traits, King’s burst speed from a stoppage can create separation from her opponents, and her agility allows her to evade would-be tacklers. The difference between King and some balanced midfielders is her ability to also win the ball at the coal face and not just be the first handball receiver. Quite often she will get her own ball and burst away, or provide the defensive team-first traits to allow teammates to take their chances going forward. When on the outside, King can receive the ball, take off and drive it forward, showcasing her balance.

At times King can rush her disposal and even though she has more time than she thinks she has, can chuck it on the boot going forward. Having that extra touch of composure could really aid her going forward as she has so many damaging traits being blessed with athleticism as well as contested and uncontested ball-winning abilities. Very few players win as much ball as she does and still lay an immense amount of tackles, which is why King is such an exciting prospect for the future.

“The sole Tasmanian AFL Women’s Academy member has the best balance between offensive and defensive capabilities, not only able to average 19.7 disposals and 4.2 inside 50s, but she amassed a whopping 9.4 tackles per game for the Devils in the NAB League Girls competition. On debut for North Melbourne VFLW she laid another seven tackles to go with 15 touches, and had the 10.5 tackles with 14.5 disposals, at the AFLW Under 19 Championships. But there is more to King than just ball-winning and tackling, with the athletic talent able to burst out of the stoppage and extract from tight situations. At times could add a touch more composure with her kicking, but her upside compiled with her well-balanced, two-way running is what makes her an outstanding prospect and rounding out the top 10.” – Peter Williams via “Draft Central AFLW Draft Power Rankings – Victorian Pool: June 2021”

“The AFL Women’s Academy member put together a really consistent season playing through the midfield, often winning the ball and bursting away, or resting forward and looking to send the ball inside. Winning at least 15 disposals in every one of her eight games, King was not only able to impact offensively, but lay a ton of tackles (9.4 per game) to make her mark defensively as well. She finished with 19.9 disposals and 4.2 inside 50s, indicating the importance she had to the team in sending the ball forward, and also winning it back from the opposition.” – Peter Williams via “2021 NAB League Girls team review: Tasmania Devils”

“Had another strong performance throughout the four quarters by winning her fair share of the ball in-close and extracting it out of the stoppage to try and get it forward. Once again it was her tackling pressure that really shone in the match, and whilst she might have rushed some of her earlier kicks, she put in a good kick to Amy Prokopiec in the second term, and worked hard moments later to slide in and mark the ball 35 metres out straight in front. Whilst the set shot fell short, she continued to push hard throughout the game and had one of the last inside 50s of the game.” – Peter Williams via “Top Performers: 2021 NAB League Girls – Elimination Finals”